Families are complicated. For some, spending time with loved ones is a glorious occasion. For others, it brings to the surface tensions and anger and resentments. But for most, it’s a bit of both. But no matter what your situation, you can take comfort that you do not belong to any of the following dysfunctional families (even though we love some, anyway). 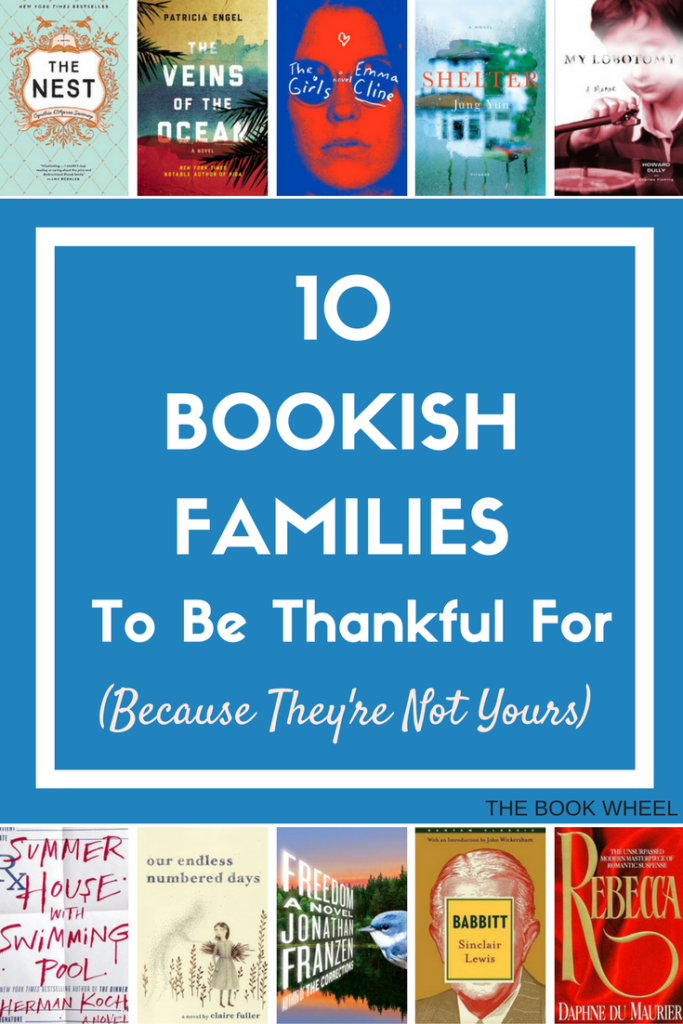 The Nest by Cynthia D’Aprix Sweeney

I absolutely loved this book but there’s no denying that the prospect of money can change how siblings interact, especially when one of them makes a massive mistake that puts everyone else’s financial security at risk. After all, money is said to be the root of all evil and money is at the core off The Nest. What follows is resentment, anger, and, at times, outright hostility. Unless you’re fighting over a family inheritance, you can be glad this is a problem you don’t have to worry about.

Veins of the Ocean by Patricia Engel

Every family has a black sheep, but is your black sheep on death row? (I sincerely hope not). Veins of the Ocean is about a young woman whose life has revolved around her brother’s incarceration and impending death as he awaits the death penalty in Florida. Complicating matters is her relationship with her mother, which also stems from her mother’s relationship with her brother. It’s a whole complicated mess and while the story focuses on the journey to recovery, it makes for a dysfuncional family.

The Girls by Emma Cline

Sometimes the family you have is the family you create, and that’s the case in The Girls, which is a fictional recreation of the Manson family. The facts and family are real, but the main character is not, and I cannot imagine a more dysfunctional family than the Mansons. Perhaps the only relatable part of the story is the need for teenagers to rebel, but the messiness runs deep in this one and you’ll be grateful for who you have in your life when you finish it.

Shelter is a fantastic book that delves into everything from a failing career to the cultural shock of immigrating to the United States. It’s a harrowing story that touches on so many facets of a dysfunctional family that I don’t know where to start, but I promise you will walk away glad that you read it, even if their relationships horrify you at time.

My Lobotomy by Howard Dully

My Lobotomy is Dully’s memoir about how he went from a typical, energetic kid to one whose parents forced him to have a lobotomy and how that impacted his life. It’s equally heartbreaking and inspiring and leave you pondering the state of mental health both in the past and now, but it will also leave you appreciative of your own parents.

Granted, all Koch books feature dysfunctional families, but this one is particularly off-putting. Set in the Netherlands, Summer House With Swimming Pool is about a doctor who befriends a famous stage actor and the complicated relationship that ensues, namely the fateful summer at the house with a swimming pool. It’s a bit Lolita’esque and tackles some pretty uncomfortable and taboo topics, but you will definitely appreciate your dad more.

This one is about a girl reintegrating into society after her survivalist father yanks her from her home to live in the woods, which is a pretty good sign of a dysfuncational family that you don’t want to be a part of, right? Filled with lyrical writing and twists and turns, you’ll love this one (even if current events have you wanting to run for the hills). Be sure to thank your parents for taking you camping, not to live in the woods.

Depending on who you ask, Franzen himself is enough to make you appreciate your own friends and family, but I do love his books. Freedom, in a nutshell, is about a socially conscious set of parents, their two children and a series of events catapult them into a new life. This book chronicles the disintegration of a delicate family and their complicated relationships with their children. It’s a long book, but it’s worth it. Bonus: It’s on the 1001 Books to Read Before You Die list.

No Thanksgiving would be complete without a book with a political bent, and that’s Babbitt, which is a great social satire about a mundane, average man who has a mid-life crisis. Desperate to be more than he is, he unabashedly pursues glamour at the expense of his family, his reputation, and himself. It reminds me of The Casual Vacancy (or rather The Casual Vacancy reminds me of Babbitt), but you’ll be grateful the men in your life who have a midlife crisis settle for a convertible.

If you haven’t read Rebecca yet, now is the time to read it (it’s the perfect winter read). It’s about Rebecca, who enters into a whirlwind romance with a man whose life and home is overshadowed by his late wife. Granted, the family dysfunction in this book is rooted in the afterlife, but the impact it has on everyday life is spooky. If you think your mother-in-law is bad, be glad you’re not Rebecca.