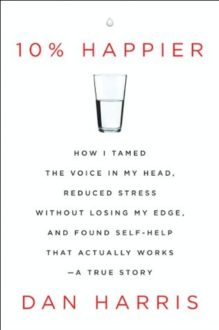 10% Happier: How I Tamed the Voice in My Head, Reduced Stress Without Losing My Edge, and Found Self-Help That Actually Works by Dan Harris
Published by It Books on March 11, 2014
Genres/Lists: Memoir, Non-Fiction, Science/Technology/Psychology
Pages: 256
Read synopsis on Goodreads
Buy the book: Amazon/Audible (this post includes affiliate links)

I could probably write a pretty lengthy review about 10% Happier: How I Tamed the Voice in My Head, Reduced Stress Without Losing My Edge, and Found Self-Help That Actually Works by Dan Harris, but at the end of the day it would be mostly babble. That’s because there are very straightforward reasons that anyone with a bit of anxiety in their lives should read it. I started out with a lot of the same preconceived notions about meditation and skepticism about authors like Eckhart Tolle, and I was glad to find someone who was in the same boat. So, I’m taking a page out of Leah at Books Speaks Volumes’ book and offering up 10 reasons to read 10% Happier:

“Mindfulness provides space between impulse and action, so you’re not a slave to whatever neurotic obsession pops into your head.” – Dan Harris