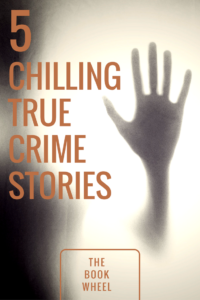 Halloween is upon us, which means it’s time to hide out with some terrifying reads, and what’s more terrifying than true life? If reading has taught me anything, it’s that the phrase the truth is stranger than fiction can be all too true and the following five true crime stories prove it. Each one terrified me in different ways – from the ability of one man to prey on young women and turn them into killers to the woman who slowly starved people to death with, seemingly, their consent, all of these books are chilling true crime stories.

Helter Skelter: The True Story of the Manson Murders by Vincent Bugliosi

If anyone can offer an intimate outsider’s perspective into the Manson murders, it’s Vincent Bugliosi, the prosecuting attorney. In Helter Skelter, he tells the story of a charismatic man who preyed on the insecurities of young women and brought them into his family. This family doesn’t conjure thoughts of dinner around the table and playtime in the backyard, but rather a society of people bucking trends and living on their own. In other words, the family was a cult and with that came the psychological control of Manson.

While everyone knows about the Manson murders, themselves, most people don’t know about the efforts they made to prepare. One of these things was to break into people’s houses while they were sleeping and move things around. They didn’t steal anything but did just enough to make people feel violated and uneasy when the woke up. This part of the book terrified me (as it did when Emma Cline wrote about it in The Girls) and I still look behind me when I can’t find my keys where I thought I left them. I read this one all night long and slept during the safety of daylight and it’s a stunning and chilling read.

A Killer in the Family by Peter Ross Range

If you’re looking for a short true crime book, this is a good one. It’s a Kindle Single, which means it’s only 49 pages and can be read in an evening. On March 1, 1976, William Bradford Bishop Jr., a family man with common troubles, horrified the nation by brutally murdering his wife, mother, and three young sons and disappearing – or so the story goes. Reality, it turns out, is a lot murkier because we don’t know for sure exactly what happened. To complicate matters, Bishop has been “missing” for 40 years and we have no idea if he’s dead or alive.

Range delves into the hidden life of Bishop, from his stalled career as a diplomat to his purported connections with the CIA, which are pretty fascinating. He also looks at the few times efforts were renewed to find him, to no avail. It’s a great book for true crime fans, but even better for those who love a good conspiracy theory. And if you pick this one up, remember this: this man could be your next door neighbor.

Starvation Heights: A True Story of Murder and Malice in the Woods of the Pacific Northwest by Gregg Olsen

In the early 1900’s, Dr. Linda Burfield Hazzard’s only goal in life was to build a sanitarium in small-town Olalla, WA, where she could practice her unconventional (and non-medically certified) cure for the ailing. She had grand dreams, a large piece of land, and a compliant husband. Her belief was that, by fasting, problems such as rheumatoid arthritis, stomach ailments, and other organic diseases could be eliminated. The problem was that they kept dying.

One of these patients was Claire Williamson, a wealthy Briton who chased faddist cures and, along with her sister Dora, stumbled into Dr. Hazzard‘s care. While this is an all-encompassing story about Dr. Hazzard, medicine at the time and the difficulties of living in a poor county, it’s primarily about the experiences of the Williamson sisters, who were subjected to Dr. Hazzard’s cures, her virulent attempts to keep them at her facility, and the trial that followed. It’s an outlandish story, even more so because it’s true.

In Cold Blood by Truman Capote

This is one of the first true crime books that I read and it piqued my interest in the genre, as morbid as that is. In Cold Blood tells the story of Clutter family’s murder, which was as violent as it was surprising because its victims included children. It was a crime that rocked the community and is a stark reminder that danger lurks around every corner. Capote did extensive research for the book, but perhaps more interestingly is that he did it with the help of his friend, Harper Lee. He shares his findings in this book, which gives readers a glimpse into the minds of the murderers while detailing the crime.

A Rage to Kill by Ann Rule

I have to admit, I haven’t read this one yet but it’s at the top of my true crime reads this Halloween season. This is partly because it’s a “classic” and partly because it includes several stories in one book. This one is on most of the lists about best true crime books and I’m a bit embarrassed that I haven’t read it yet but if you have, let me know what you thought of it in the comments!

What true crime book do you recommend?