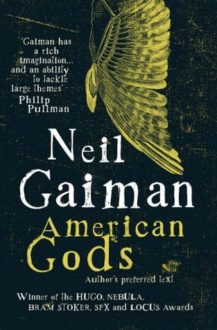 American Gods by Neil Gaiman
Also by this author: The Ocean at the End of the Lane
Published by Headline Review on 2001
Genres/Lists: Fiction
Pages: 658
Read synopsis on Goodreads
Buy the book: Amazon/Audible (this post includes affiliate links)

A few weeks ago, I asked my Facebook and Twitter friends to tell me what book to read next. My options were The Goldfinch, A Prayer for Owen Meany, and American Gods, but American Gods received an overwhelming number of recommendations when compared to the other two (I did, however, also read Owen Meany and you can read that review next week). Although I’d previously read Neil Gaiman’s The Ocean at the End of the Lane (read my review) for Dewey’s 24-Hour Readathon, I must confess I went into American Gods not knowing much about the author. Since then, I’ve started learning a little more about him (did you see his Ice Bucket challenge?) and admit I’m an instant fan. That said, let’s move on to the book.

American Gods is, at its core, a social commentary on the things Americans worship. The story follows Shadow, a man who takes a job with Mr. Wednesday immediately after his release from prison. He’s not entirely sure who Mr. Wednesday is or what he does, but he crisscrosses the country with him and meets some interesting people along the way. What the reader learns, along with Shadow, is that the people he meets are the physical representations of various gods that are kept alive by people’s belief in them. Years ago, as people migrated to the United States, they brought their folklore and belief systems with them. Unfortunately, as people become more “Americanized” they begin to worship new things, such as the media, technology, and transportation. These “new” American Gods are also represented by real people, and the old is at war with the new for their place in the world.

If I haven’t lost you yet, let me be clear that this book is absolutely stunning and that you shouldn’t judge it based on my summary because it’s such a layered book that it’s difficult to explain. American Gods takes a look at what Americans worship today and how these new preoccupations affect our personal histories. It begs the question of whether our ancestors and their beliefs matter, and it mocks the the “gods” that Americans worship today. More than just as social commentary, however, Gaiman strikes a chord in the hearts of readers with his incredible character development and fast-paced storyline. Despite its length, American Gods is impossible to put down and will leave you wanting more.

Recommended for: Fans of subtle social commentaries and a bit of the fantastical.

What was the last chunkster you devoured?

On Mystic Lake by Kristin Hannah Takes the Obvious Path 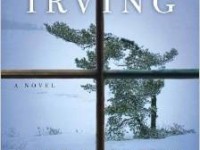