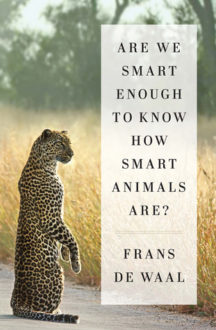 I love animals. I’d like to think that I understand them because I have rescued more than my fair share of birds (including a wild owl incident), have been chased by a pack of baby raccoons, and love my dogs to pieces. Plus,  I’ve always believe that animals know a lot more than they let on. For many years,  science did not support this line of thinking. Animals were considered reactive, not proactive. That’s changing, in part because of people like this author who have taken the study of animals and expanded it to include cognition.

If you like animals even a little bit, then Are We Smart Enough to Know How Smart Animals Are? by Dutch author and psychologist Frans de Waal is definitely a book you will want to read. It is very approachable and is written in story form, despite being a nonfiction book that could have been highly technical and not at all interesting. But, instead, it is fascinating and impossible to put down.

The basic premise is that animals are extremely smart and aware of their surroundings, social hierarchies, and even plan for the future. All of these are hotly debated actions but experiments and observation have shown that animals are smarter than we think. It’s actually  us humans to complicate matters.

We do this because we don’t want to think that an octopus or a crow could be as cognitively aware as we are. But if we stop to observe animals in their own context of living life, or Umvelt, they do amazing things that humans do. This includes planning for the future by hoarding food, engaging in sneaky behavior in order to escape the wrath of a more dominant counterpart, and even being a bit vain about physical appearances.

Ever wondered why your stomach flips when your #dog gazes into your eyes? Read this book. Click To Tweet

Some primates, for example, will decorate themselves in front of a mirror. Some birds know to put rocks in a tube of water in order to float the food up, which shows and incredible awareness of how to use available tools. Elephants and primates know how to find and use tools to achieve a goal. And even an octopus can open a child proof medicine bottle.

Now you might be thinking that it is easy to train animals to do the things, and you’d be right. Animals can be trained to do these things, however they also engage in these behaviors without being prompted. These experiments are all fun and games until the animals outmaneuver human children, which is when things get complicated. Because we like to think that humans are special, when in reality we are adapted to our own Umvelt. Sure, humans have advanced language and tool making skills, but this is the result of evolution, not because we were granted special powers.

And this is the crux of the book. As de Waal proved over and over again that animals are cognitively aware and have abilities beyond our wildest imagination, there is a camp of scientists who refuse to believe it. The author delicately dismisses these opinions while offering evidence to the contrary. He does so without belittling people with differing opinions, but anyone who has spent time with animals knows he is onto something.

That said, de Waal works with primates and so the book is very heavily focused on them, though it does delve into birds, fish, and elephants. Although this was initially disappointing because I was hoping for a more diverse group of animals, I quickly got over it. And in hindsight, his primary focus makes sense because primates are the most similar to humans, and therefore the most controversial and easy to understand when it comes to comparisons.

So, if you want to know why your parental instincts kick in when your dog gazes into your eyes, or how and why some animals perform better than human children on tests, then read this book. And if you are a skeptic, I urge you to read this with an open mind because perhaps you will learn something new.