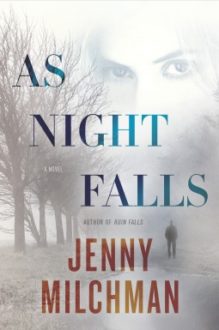 As Night Falls by Jenny Milchman
Also by this author: Cover of Snow, Ruin Falls
on June 30, 2015
Genres/Lists: Fiction, Mystery/Thriller, #30Authors
Pages: 384
Read synopsis on Goodreads
I received this book for free from the publisher.
Buy the book: Amazon/Audible (this post includes affiliate links)

This book holds a special place in my heart because not only do I consider Jenny a friend (she helped start #30Authors), but she thanked me and a few other bloggers in the acknowledgements section of this book, which still amazes me. That said, I tried very hard to review this independently of my personal feelings and I loved her style before we became friends. So, on to the book!

Two convicts escape from prison and head toward the Canadian border, only to have things work out differently from what they expected. Sound familiar? It should, because something very similar happened in real life not that long ago. Fortunately for Jenny Milchman, the publicity surrounding the event made for the perfect (and free) advertisement for her new book, As Night Falls, because the premise is very similar. Of course, she wrote the book before the escape, so the similarities end there, but it’s still an interesting turn of events.

A fast-paced #thriller about two escaped convicts and one scared killer? Find out what #book it is here: Click To Tweet

As for the book, it stands on its own even without the real-life comparisons. At first blush, As Night Falls seems pretty straightforward: A regular family meets an unfortunate situation involving two escapees and bad things happen. There’s Sandy, therapist and mom to your run-of-the-mill surly teenage daughter, Ivy, and Ben, husband extraordinaire. What makes it interesting is that Ivy knows that her mom is hiding something even if she doesn’t know what it is and Ben is so in love with his wife that he never questioned her refusal to discuss her past, which is exactly what comes back to haunt them. Why? Because the two men who show up on her doorstep do know, and it’s this knowledge that puts the Tremont family in danger, forcing Sandy to face her demons and fight for her future. As Night Falls is about this struggle, both physical and emotional, and chronicles one horrific night with devastating and permanent consequences.

What I love about Jenny’s books is that she doesn’t waste any time getting straight to business. She gives the reader just enough background and context to get the story going and then jumps right into the thick of it. It reminds me of bungee jumping – you walk slowly to the edge, fall full force into the abyss, and have no idea whether you’ll end up crushed or grateful. The uncertainty is both exhilarating and terrifying, and yet the adrenaline rush keeps you going. It’s the perfect psychological thriller because instead of making you fear the bumps in the night, it will make you wary of strangers in the daylight.

Recommended for: Fans of female protagonists who aren’t perfect and fast-paced psychological thrillers.