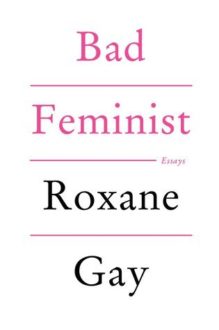 Confession: I am a bad feminist. I try, I really do, but sometimes it can be exhausting and while I’m pretty vocal in my beliefs, I sometimes let things slide because I have other things to do. Luckily, Roxane Gay has granted me a reprieve because she, too, is a Bad Feminist. There were parts of this book that made me feel like I found a kindred spirit (I, too, find rap music equally offensive and irresistible), but there were also parts that left me feeling guilty because there were issues discussed that I never would have considered on my own. The point is that she raised those issues and lit a spark in the shadows of my mind where my own shortcomings like to hide.

Bad Feminist is a book of essays addressing a range of topics: personal experiences, commentary on women and race, film, reading, politics, her own ignorance, and so much more. Unlike many “feminism” books, Gay doesn’t assert herself as an authority on all things gender-related. Instead, she acknowledges that she, too, has been judgmental and ignorant in the past and discusses her wake-up calls with raw honesty. I particularly liked her essay on privilege because she points out that everyone has challenges in life, regardless of their background. It’s such a simple concept but it’s one that many people, myself included, easily forget.

Because Gay is a writer, there were a lot of essays that touched on the importance of writing and reading. As a reader, I know that writing is important – it opens your eyes to new worlds, new experiences, and makes you more empathetic – but Gay goes deeper than that. If I had to pick a favorite part of the book, it would be her discussion about diversity in publishing. I won’t detail the entire essay because to do so would take away from its full impact (and you should read it yourself), but I will leave you with these two lines:

“….reading is my first love. I don’t want us to lose sight of the joy of reading because we’re all too focused on the bitter realities of how our reading material finds its way into the world and struggles to have a fighting chance.”

“Great books remind me that when we spend more time talking about publishing than we talk about books themselves, we forget what matters most.”

Now that I’ve lapped on the praise, I’ll admit that I skipped two essays. The essays in question were about movies that I haven’t seen and, much like reading the book before seeing the movie, I want to see the movies before reading the critiques. I have every intention of coming back to the book but Gay’s brutal dissection of The Help (which I DNF’d and had no loyalty to) made me wonder if I would see what she saw (whatever that was).

In the end, this is not your average “feminist” book and it’s a better book for it. I have read my fair share of them and while many of them are great books, they tend to follow a certain flow: First, they discuss why men are in charge and all of the ways they want to oppress us. Then they talk about how women need to help women and paint a very rosy picture that ignores the reality that, in many instances, women are the biggest obstacle to women. Lastly, there’s a call-to-action with a workbook at the end to help make the world a better place.

I’m not saying there’s anything wrong with these books but they do tend to follow a formula and Gay bucks the trend. She openly criticizes some of the most popular essays and books on feminism (with good reason), discusses her own issues with being labelled a feminist, and shares her non-feministy ways. She doesn’t have any blanket expectations for how feminism should be and lets the readers know that it’s okay to take a little break every once in a while. As a woman who fights for equality and listens to Lil Jon and 50 Cent daily, it’s a refreshing perspective and it’s nice to know that while I may be a bad feminist, I’m still a feminist.

Recommended for: Men and women who want an honest discussion about feminism that’s rooted in reality, not fantasy.