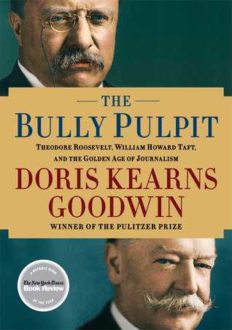 I don’t even know where to start reviewing The Bully Pulpit because it’s such a big and all-encompassing one. In short, it’s about one of Americas most famous friendships between Presidents’ Roosevelt and Taft and its rapid and public unraveling. Beyond that, it’s also about the first president who harnessed the power of the press, the divergence of the Republican party, and the power of journalism to transform public thought. Because this book is really three stories in one, I’m going to break up the review into three sections: Roosevelt, Taft, their friendship, and journalism and politics. If this review seems long, remember the book is over 900 pages!

Theodore Roosevelt was a force of nature who took Washington by storm and left the country transformed after he left. He was the first president to really harness the power of the media, treating them like friends and letting them join him for his afternoon shaves. This, combined with his ability to laugh at himself and take criticism well, led to some very positive coverage. Of course, his reputation as the trust-buster and champion of the people didn’t hurt, either.

He was a big outdoorsmen who found rigorous activity to be therapeutic and put many foreign diplomats through the physical-ringer during their talks. As for his personal life, he was married twice – first to a woman who died early on in their marriage and then to Edith, his childhood friend and alleged sweetheart (this is a pretty interesting story, actually). After the presidency and his failed run at a third term, he headed to the Amazon to explore a new river, which you can read all about in The River of Doubt.

“Death had to take him sleeping, for if Roosevelt has been awake, there would have been a fight.”

William Howard Taft was a congenial man who swore, more than once, that he would never run for president. A judge whose main goal was to make it to the U.S. Supreme Court, Taft’s friendship with Roosevelt and marriage to a strong-willed woman who wanted to live in the White House steered him into an unexpected career. He was handpicked by Roosevelt to run for president when his two terms were up, as everyone was confident that he would carry out Roosevelt’s reform policies. Unlike Roosevelt, Taft was a peacekeeper and a force of nature, and so expectations were not met. Many point to the fact that Nellie, his powerhouse wife who bucked tradition by riding with her husband to the White House after the inauguration for the first time, had a stroke just ten weeks into the presidency, considerably diminishing her ability to actively support her husband.

“[Taft] is the best man I have ever known, too honest for the Presidency, possibly, and possibly too good-natured or too trusting or too something on which it is hard just now for a contemporary to put his finger, but on which the finger of the historian of our politics will be placed.”

– Archie Butt on President Taft, Military aide and personal friend to both Taft and Roosevelt

Their Friendship and Falling Out

Roosevelt and Taft were friends for a lot longer than they were enemies, so the disintegration of their brotherhood was particularly devastating to both them and the American public. They arrived in Washington at the same time, lived near each other, and Roosevelt helped cultivate Taft’s career in politics (along with Nellie’s urging, of course). Although Roosevelt offered Taft his dream job on the Supreme Court twice, he turned it down out of duty to his current endeavors.

Both men were close to their siblings, were in very loving marriages, and believed in the same goals: worker’s rights, breaking up monopolies, and other social reforms. Unfortunately, following Taft’s election in 1908, Roosevelt departed for a year-long hunting excursion in Africa and things began to change. While Roosevelt was gone, Taft made a series of decisions that ran counter to Roosevelt’s plans for the country, including dismissing one of Roosevelt’s most trusted colleagues. Upon returning, Roosevelt was not quiet in voicing his opinions and the two friends quickly began to drift apart.

Things hit full tilt when Roosevelt decided to run against Taft in the Republican primary, seeking a third term in an unprecedented move. Following a dramatically contested loss in the primaries, Roosevelt split off and ran as a third-party candidate, thus splitting the party into two and allowing the Democrat, Woodrow Wilson, to win the 1912 election. During this time, the two men went from being indifferent to downright hostile toward each other, dividing the party in ways that would change politics forever.

– Roosevelt on Taft during the contentious campaign for the 1912 nomination

While Roosevelt was president, he built a relationship with the media that would shape presidential coverage for ever. He befriended journalists, was not offended when they criticized him, and was pretty blunt with them about his thoughts. It was during this time that a group of journalists known as muckrakers began what’s now known as investigative reporting, covering union strikes and advocating for worker reform, among other relevant topics. Led by McClure’s Magazine, they revolutionized the media and demonstrated, for the first time, how newspapers can alter the course of public opinion and result in the demand for change.

“No president ever lived on better term with the newspapermen than did Roosevelt.”

I was inspired to read this book after finishing The River of Doubt. While 1500 pages of Roosevelt is a little much, it didn’t diminish my interest in the book at all. Each chapter ends by comparing and contrasting the two men with regard to the chapter’s main topic, and so it’s easy to grasp their similarities and differences from early childhood and throughout their lives. The same goes for their wives, and the result is a complete and well-rounded picture of each man independently, as a husband, and as a politician.

The style is narrative non-fiction and, quite frankly, impossible to put down. At several points in the book I thought maybe I should take a break and read a short fiction story but never managed to do it because I couldn’t stop reading this one. It’s as comprehensive as it is approachable and you won’t regret reading it. Of course, now I have several new books on my TBR – such as one about the muckrakers, one about Taft, and one about the party split.

Recommended for: If you’re afraid of chunksters or dislike politics, then this might not be the best place to start. If you do like comprehensive biographies/historical non-fiction that gives you a 3-D view of a life story worth being told, then definitely pick this one up. I feel like this is a book that I can’t convince someone to read if they don’t already have an interest in it, but if you’re interested, then I recommend getting to it!

So, will you read it? 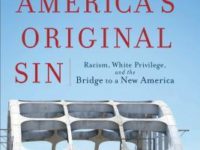