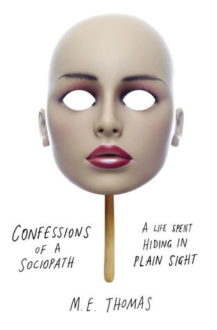 Confessions of a Sociopath: A Life Spent Hiding in Plain Sight by M.E. Thomas
Published by Crown Publishing Group on May 14, 2013
Genres/Lists: Memoir, Non-Fiction
Pages: 320
Read synopsis on Goodreads
I received this book for free from the publisher.
Buy the book: Amazon/Audible (this post includes affiliate links)

Have you ever manipulated anyone? Or used your charm to get what you want? Or rationalized bad behavior? Chances are, even if you don’t want to admit it, the answer is yes, which means that you, too, exhibit slightly sociopathic tendencies. The idea that everyone can relate to a sociopath is the undercurrent of Confessions of a Sociopath by M.E. Thomas. Thomas, a self-proclaimed sociopath, offers readers an inside glimpse into the minds of sociopaths everywhere. Although the book is largely personal, she draws from encounters with other sociopaths on her website to draw broad conclusions. Here are five things that might surprise you:

It any of the above have sparked your curiosity, then I highly recommend reading this book. Thomas blends personal experiences (including her devout Mormonism) with scientific studies to try to understand herself and educate the public about why they shouldn’t start chasing sociopaths with pitchforks. One criticism of the book that I’ve come across on a few occasions has to do with her appreciation for her parents even though they were clearly awful. I chalk this up to her rational approach to life – she doesn’t care that her parents were awful because she can see how her upbringing helped her become integrated into society. In the end, despite the jumpiness of the storyline, I enjoyed the book and recommend it to anyone who’s interested in the subject.

Be honest, how many sociopaths do you think you know?