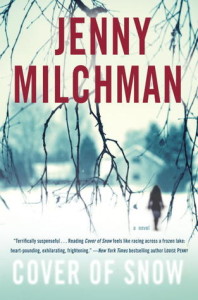 That’s it. From now on I am only reading books from the IndieBound Next List. This is only my second read that I picked straight from the list and both of them have been amazing (the first was Y by Marjorie Celona). Cover of Snow is the debut novel by Jenny Milchman that follows a woman who seeks to find the truth behind her husband’s suicide, only to uncover secrets she never expected.

Nora Hamilton, the main character, lived an unassuming life in a small town in the Adirondack Mountains of New York. The story opens with her discovering that her husband, who to her knowledge was happy and looking forward to their future together, committed suicide. Stumbling through the shock of the first few weeks, Nora begins to search for a way to understand why her husband would take his seemingly happy life. Along with her reporter friend, Nora faces deadly obstacles as she seeks for answers.

Hauntingly realistic, the story weaves a tale of small town secrets, deception, corruption, and power. Cover of Snow is part mystery, part crime, and part thriller. But it is all intriguing and I couldn’t put it down. Many authors, new and old, oftentimes struggle with weaving a story that has unpredictable twists and turns that result in a realistic ending, and Milchman nails it on her first try.

I absolutely recommend this book.

‘Before We Were Yours’ a Story of History, Corruption, and Love
On Mystic Lake by Kristin Hannah Takes the Obvious Path