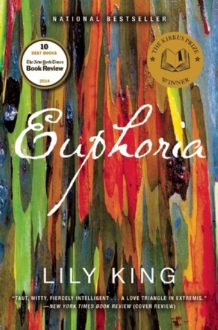 Before Cynthia Bond was an Oprah darling, she was kind enough to participate in The Book Wheel’s inaugural #30Authors event. In it, she reviewed Lily King’s Euphoria, a book about three anthropologists caught in a love triangle with longterm implications. Euphoria is a stunning novel, both in its beautifully subtle style of writing and the story that King creates and I can’t believe it has taken me this long to pick it up. In the future, if Cynthia Bond says to read something, I will be sure to do so sooner.

Set in the Territory of New Guinea, Euphoria follows the lives of Andrew, Nell, and Fen. Nell and Fen are married and come across an old acquaintance, Andrew, when they return from living with a local tribe. Lonely from his time spent studying his own tribe solo, Andrew attempts to keep his renewed contact with the familiar alive by helping Nell and Fen find a nearby tribe to study. He is successful, thus setting into motion actions with lifelong consequences.

It’s impossible to discuss Euphoria without discussing its three main characters, who couldn’t be more different from each other. Fen is an unlikable man whose primary focus is doing. He’s the type of guy who will cut a growth out of his own skin with a penknife and needs to be in control. Nell, on the other hand, prefers to observe, for she is always scurrying off to watch and take notes on some ritual or another. Lastly, there’s Andrew, who finds himself in the middle of this unlikely duo and who is still struggling to find his own way of doing things.

What’s so great about the way the characters were written is that the reader gets to see them in both their professional and personal lives. Even the tiniest details, such as chewing on a pencil tip, are consistent and make the characters come alive. But for me, it was the dynamic between the three from a professional standpoint that fascinated me the most. I took some anthropology classes in undergrad and I found the theoretical questions that arose fascinating. King was not afraid to raise these same questions, pointedly questioning the role of the subjectivity of the observer, the projection of personal experiences on the natives, and the role of creating scenarios out of observations.

Another thing that King did well was to paint a picture of the setting and the natives. I felt as if I were ducking below branches while being canoed out to visit the Tam alongside Nell and that I could feel the vibrations of the drums Andrew must have felt during a ritualistic ceremony. Her skillful descriptions put the reader right there on the river with the characters, so rather than telling the story from a bird’s eye view, King plops you right down in the middle of it. Even better, she does so with such subtlety that you don’t even realize it is happening.

Euphoria is truly a literary gem. The characters are flawed but real, the story line beautiful but subtle, and the imagery vivid but not overdone. While I was most interested in Nell’s story, it was so enmeshed with Andrew’s and Fen’s that it was impossible to disentangle them. For such a short book, King packed in a lot of details and no event or description is superfluous, making this the perfect weekend read.

Recommended for: Everyone who enjoys literature, beautiful prose, and a book that puts you right in the middle of things.

They Aren’t Vampires, But You Will Drink Up This Debut Novel Anyway