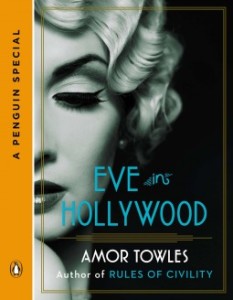 Eve in Hollywood by Amor Towles
Also by this author: Rules of Civility, A Gentleman in Moscow
Published by Penguin Group on June 25, 2013
Genres/Lists: Fiction
Pages: Roughly 100
Read synopsis on Goodreads
Buy the book: Amazon/Audible (this post includes affiliate links)

Oh, how I love Amor Towles. Granted, I’ve only read two things by him, but I’ve loved both of them. Last summer I raved about Rules of Civility and it made my Top 13 Books of 2013 list without a fight, so when he released this novella as a follow-up on my birthday, I was thrilled. Even though it took me a few months to get around to reading it, I devoured it in one sitting and can say that his incredible writing was not a one-time thing.

Although Eve in Hollywood picks up where Rules of Civility leaves off, it is a distinctly independent novella that follows Eve in, well, Hollywood. Each chapter is told by a different person she encounters along the way, all of whom she has a resounding effect on. From shy starlets to movie producers to chauffeurs, Eve touches each of their lives with a nonchalant charm that few can pull off.

One problem I oftentimes have with follow-ups like this is that the characters somehow end up becoming unrecognizable versions of their former selves. Fans of Rules of Civility, however, will be pleased by the author’s ability to maintain the integrity and essence of Eve’s original character. I’m loathe to compare this short read to Towles‘ full-length novel, but I would be remiss in ignoring the stylistic differences between the two. Where as Rules of Civility is a book to languish in, Eve in Hollywood is a faster-paced read. Although they offer entirely different reading experiences, Towles‘ sincere way with words shines through in both.

* Side note – In this book there was mention of David O. Selznick, a Hollywood producer who was also named in Breakfast at Tiffany’s by Truman Capote. I found in interesting that real names of producers were used because, of course, anyone whose real name is used nowadays would probably sue.