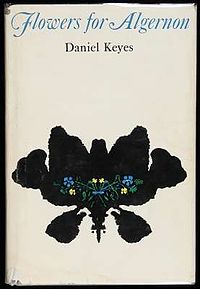 My husband’s not a reader. At all. But, for years he’s been bugging me to read this book, so I finally decided to take his advice and take the plunge. I can’t decide whether I want to smack him or hug him for making me read it. I want to hug him because it was so good, but I want to smack him because it left me in emotional turmoil and he wouldn’t wake up at 2:00 am to discuss my feelings about the book. And then, when I attempted to explain my feelings to him the next morning (with tears in my eyes), he laughed at me and proceeded to tell me that the reason he doesn’t like to read is because he read this book and it’s just so darned depressing. So like I said, I’m not sure which reaction is best. One thing that is in favor of hugging versus smacking him is that I am not averse to sad books and loved Flowers for Algernon.

Before jumping into a discussion about it, I’d like to preface this review with the fact that I hate diary books. I hate books that are written in the style of a child or with a lot of slang and those that are structured by diary entries rather than normal chapters.  I couldn’t get into Room or The Help or Precious, but because my husband was so adamant that I read this book, I suffered through the style and ended up loving the book. Part of the reason is that, aside from the fantastic story, the writing style became easier to understand as the book progresses.

In case you’ve been living under a rock (as I had been), Flowers for Algernon is about a mentally impaired adult who undergoes an experimental surgery to make him a genius. As he learns more and more about the world, he surpasses his peers in all things intellectual but remains the same emotionally. But is this necessarily a good thing? That depends on who you ask and when you ask them. Before the surgery, Charlie Gordon was living blissfully unaware of many of the world’s injustices, including people’s treatment of him, but after the surgery his eyes were opened and everything he thought he knew about life changed. Much like Plato’s Allegory of the Cave, which is referenced in the book, the question remains whether it is better to live in the dark or be blinded by the light.

There are a million reasons to read this book. It’s well-written, it’s a good story, the characters are fantastic, and Charlie Gordon is an excellent protagonist. But, the number one reason to read this book has nothing to do with the story. Instead, it’s for the way it will leave you when it’s over. This is not a book that can be easily moved on from and it left me pondering the issues it addresses for days. Is it better to live in ignorance? And once you know, is it your duty to do something about the injustices of the world? Do we have a responsibility to others? What are the ethical obligations of scientists who use human test subjects? Should we value intelligence over all other achievements? These are just some of the questions I was left asking myself.

Like I said, this book left me with a lot of questions about life in general, many of which I am still mulling over and don’t have the answers to. But I do know that they are worth asking and that I’m grateful to this book for the reminder.