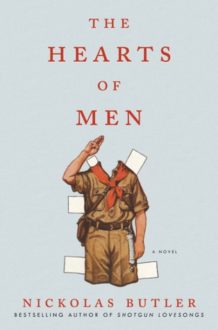 The Hearts of Men by Nickolas Butler
Also by this author: Shotgun Lovesongs: A Novel
Published by Ecco on March 7, 2017
Genres/Lists: Fiction
Pages: 400
Read synopsis on Goodreads
Buy the book: Amazon/Audible (this post includes affiliate links)

Few authors are able to strike at the hearts of a reader quite like Nickolas Butler. His first novel, Shotgun Lovesongs, was brilliant and put its finger on the pulse of a vein of American life in a way that neither glorified nor condemned life in a small town. In his latest, The Hearts of Men, Butler pours some of his own experiences into a novel about boy scouting, a lifetime of evolving friendship, and how our childhood experiences shape the adults we become.

“Hope had held her hostage.”

Nelson didn’t have a lot of friends growing up. A small, timid boy with unpopular hobbies, he was often the target of summer camp cruelties. The one friend he did have, Jonathan, was fraught with the complications that come with being a teenage boy: fitting in while trying to stand out, being kind without being perceived as weak, and being yourself when individuality isn’t always valued. This was particularly true for Jonathan and Nelson, who spent their summers together at Boy Scout camp, where order and conformity ruled.

Under the starlit skies in Wisconsin, the two boys came of age side by side, but at the end of each summer they went their separate ways. For Nelson, this meant wrestling with his difficult home life and deciding who he wanted to be when he grew up. For Jonathan, who seemed to have it all, it meant setting aside expectations and becoming his own man.

The Hearts of Men follows Nelson, Jonathan, and their  families throughout their lives. From their summers in Boy Scout camp to their early days as fathers to their twilight years, their relationship brings their own sons into the fold as they, too, head off to Boy Scout camp. As with real life, they encounter the struggles that come with growing up: seeing their parents as individuals, choosing a career, and deciding what kind of fathers they want to be.

Nickolas Butler stuns again in The Hearts of Men - how does he do it? Click To Tweet

There are parts of this book when my heart ached for the characters. Bullying takes place, and it’s clear that it leaves its mark on a person and can affect the arc of their life. But there’s also joy, particularly in the form of Wilbur, who sees the talent in people and roots it out of them, no matter how deeply it is buried.

Butler has, once again, done an amazing job of telling the story of people – everyday people – who, like many of us, carry our scars with us as we try to make it through each day. Because no matter how privileged someone appears to be, we all have our secret pains. I also loved the Gators references, but that’s because I grew up in Gainesville!

If you were looking for a book about someone who could be you, your neighbor, or your summer camp buddy, and aren’t afraid of the sticky situations brought into our lives by others, then pick up The Hearts of Men.

Recommended for: Readers of fiction that strikes at the heart of real life, good and bad. 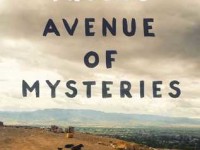 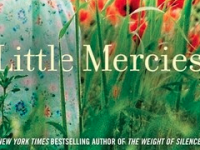