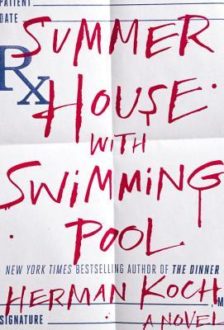 I’ve read a lot of reviews of Summer House with Swimming Pool and the general consensus seems to be that those who read the author’s previous book, The Dinner, enjoyed this one less. I am not one of those people. Maybe it’s because I have a penchant for books that tackle difficult topics in a frank manner or because I’m just an oddity, but I enjoyed this book much more than Koch’s previous book (see my review of The Dinner here).

Set in the Netherlands, Summer House With Swimming Pool is about a doctor (Marc) who befriends a famous stage actor (Ralph) and the complicated relationship that ensues, namely the fateful summer at the house with a swimming pool. From the get-go, we know that Ralph’s time on this earth is limited and that Marc is somehow involved, but we don’t know how or why and it is the beginning and ending of their friendship that provides the bookends for the real story.

Koch is an author known for his direct way of writing and for delving into delicate issues, as anyone who read The Dinner knows very well. This book is no exception and most of the uncomfortable topics were Lolita’esque in nature. That’s not to say that the plot itself parallels Lolita, but the overt sexualization of characters of all ages and marital statuses is not off limits. That said, some of his insights will leave you both grimacing and realizing that, if we’re being totally honest, probably true for a good number of people. Koch loves to raise taboo topics that no one discusses but everyone is thinking.

Herman Koch tackles taboo topics in Summer House with Swimming Pool, & it will remind you of Lolita. Click To Tweet

The only problem I had with this book was that it talks about former President Bush throwing back a few shots of whiskey in the White House, which is likely false considering that Bush is a recovered alcoholic and probably not drinking with people lacking proper security clearances, if at all. The policy wonk in me was bothered by this and I’m not sure whether this was an insensitivity assumption on the part of the author or that he just didn’t know. Either way, alcoholism is not something to be toyed with when referring to an actual person, even in fiction.

Recommended for: Anyone who has a stomach for difficult topics and isn’t afraid to be open to lines of thinking that aren’t socially acceptable.