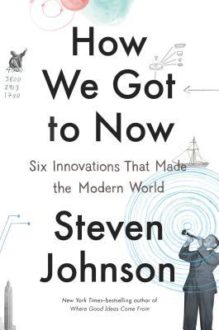 How We Got to Now: Six Innovations That Made the Modern World by Steven Johnson
Published by Riverhead Books on September 30, 2014
Genres/Lists: Non-Fiction, Science/Technology/Psychology
Pages: 255
Read synopsis on Goodreads
Buy the book: Amazon/Audible (this post includes affiliate links)

What does the printing press have to do with germ theory? How did glass give rise to the selfie? And what’s the deal with time? If you are wondering about the answers to these questions then you’re going to want to pick up How We Got to Now: Six Innovations That Made the Modern World. It’s a brief but comprehensive book, covering a wide range of topics in just enough depth to give the reader a glimpse into how the technology of today is rooted in some pretty basic and amazing discoveries.

So basically, things are linked in a linear fashion and one discovery has led, through a chain of events, to what we have and use in the modern world. There actually aren’t that many “lightbulb” moments in the world of discovery. Instead, most inventions are made using the networks/systems model. So, if person A didn’t discover something, then chances are someone else would have because most technologies were being worked on and tinkered with by many people, not just one. Not only that, but many inventions that “made it” are a result of a good invention and good marketing – some inventions actually came a lot earlier than we thought, only never heard about them because their inventors were terrible at promoting the product or finding a market for it at the time. As for the “lightbulb” moments, they were generally accidents and not intentional, so those people were just plain lucky in that their mistakes worked out.

I must say, I learned a lot from this book. It’s broken down into six chapters – glass, cold, sound, clean, time, and light – and each starts with a simple invention that was revolutionary at the time and follows its direct links to what we have today. It blends both the fun and weird backstories of the inventors themselves with the science that went into into their products (whether intentional or not). Each chapter is independent of the others so you can either read the entire book or read one chapter at a time over a longer period. Either way, it’s a fascinating and fun read.

Now for the fun part. Rather than giving you the answers and spoiling the book, I’m going to give you a few insights into the questions raised so that you will want to run out and read the book yourself.

What does the printing press have to do with germ theory? Find out this & more in this book by @stevenbjohnson Click To Tweet

Glass. What does the printing press have to do with germ theory? And what about fiber optic cables? How did we figure out that these strings of glass could connect the world via the World Wide Web? And what about the Muranos?

Cold. Who invented the air conditioner and what does that have to do with the political makeup of America? And who was the rich guy that decided ice should be a commodity, anyway? And who decided frozen food was a good idea? (On a personal note, I found this chapter really interesting because it talks about Carrier and my husband is a certified Carrier Traniscold tech. I also found myself eating a frozen food made by the same people mentioned in this book, which is kind of neat).

Sound. Where exactly does that static sound from the 60’s come from? And what does Morse code have to do with gender-based abortions? And could the 10,000 deaths by U-Boat have been prevented?

Clean. What does sewage have to do with swimwear? Where is the cleanest place in the world? Is there even such a thing as water that is “too clean”? And what’s with Chicago’s infrastructure? (Fun fact: The invention of the term “soap opera” is in this chapter).

What does sewage have to do with swimwear? Find the answer this this & more in this book by @stevenbjohnson. Click To Tweet

Time. How did Galileo getting bored in church lead to the discovery of radiocarbon decay? And what does that have to do with Sears catalogs? And what is The Clock of the Long Now? And how did we manage to sync and entire world to one time?

Light. Did people really hang out in the skulls of whales to find a source of light? And how many whales were killed for this endeavor? And what’s with insomnia, anyway?

As you can see, this book raises a ton of questions but the great thing is that it also answers them. Each chapter goes by pretty quickly and the author’s style of writing is very informal, so even though there are times where he delves deeper into the science of the discoveries (which not everyone will appreciate), it’s very approachable. He’s also very punny, which I appreciate. For example, he shines a light on the discovery of electricity. Get it? I love it.

Recommended for: Anyone curious about how stuff works and how inventions spur other inventions. It’s filled with anecdotes about the people who did the inventing, is also rooted in science, and offers a perfect blend of fun backstory and scientific innovation.

Which of these “elements” are you most interested in learning about and why? 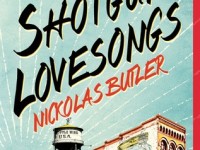