Today is a big day! Today Running ‘N’ Reading and I have teamed up to present to you the NEW cover of J.J. Hensley’s latest book, Chalk’s Outline, a fantastic interview, and a giveaway (on Running ‘N ‘Reading’s site)!!

Chalk’s Outline is J.J.’s third novel and brings the suspense you can expect from this accomplished thriller writer. J.J. is also an ardent #30Authors supporter and contributor, which makes this event all the more exciting. Please take a few minutes to learn more about him, enter the giveaway, and visit J.J.’s blog.

Now, for the grand event……. the COVER! 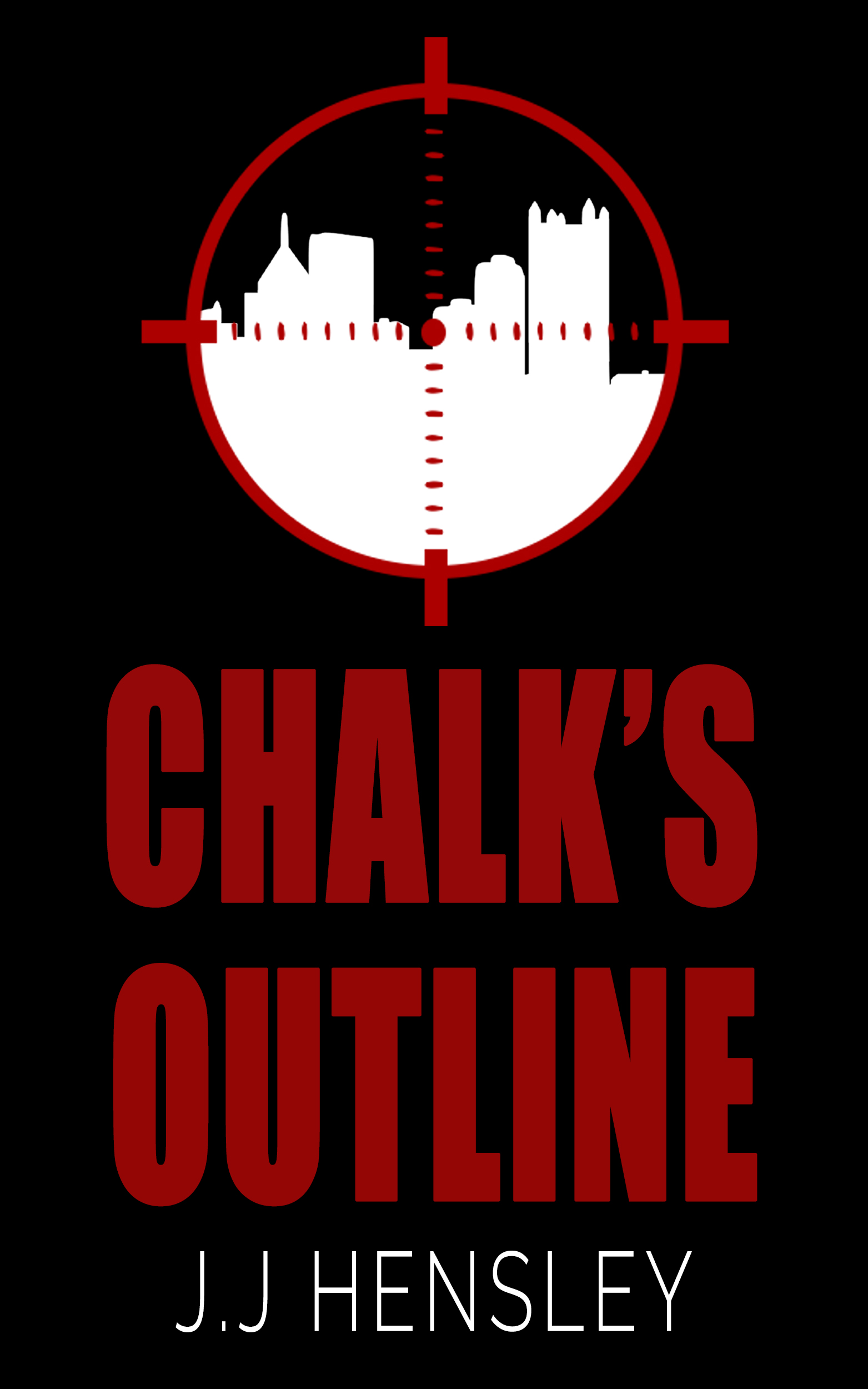 1.  Tell us about you and your latest book.

I’m a former police officer and former Secret Service agent whose wife kept telling him he should try to write a book.  Being a man, I didn’t follow her advice for years.  However, I eventually gave it a shot and came up with a mystery titled Resolve, which I figured would never see the light of day.  To my surprise, the novel not only got published but ended up being a Thriller Award finalist, one of Suspense Magazine’s books of the year, and received several other accolades.  (This is usually the part where I hear my wife’s voice saying, “I told you so.”)  Anyway, I kept on writing and came up with a thriller called Measure Twice, which has been extremely well received thus far.

My next book is Chalk’s Outline, which is due out in February 2016.  The storyline for C.O. is as follows:

Three years ago, Criminology professor Dr. Cyprus Keller became entangled in a series of murders that occurred at Three Rivers University in Pittsburgh.  Due to a series of unfortunate events, Keller found himself in a position in which he decided to take matters into his own hands and seek justice.

Jackson Channing, a recovering alcoholic who happens to be a consultant with the Pittsburgh Police Department, has been assigned a perplexing cold case and his investigation points to Keller as the main suspect.

Keller is running from the past.  Channing is trying to define his future.  Complicating the matter is that a man named Robert Chalk has a rifle and a mission:  Kill Cyprus Keller.

2. Chalk’s Outline brings together characters from your previous books, Measure Twice and Resolve. What made you decide to take that approach? Was it fun blending the two?

Readers who have discovered Resolve and Measure Twice know I do my best to defy convention.  I structured Resolve into 26.2 chapters to mirror the mileage of a marathon and used the 12 steps of addiction recovery to map out Measure Twice.  So, I thought why not go against the grain and have my third novel bring together some of the characters of my previous books?  Aside from that – while each book can be read as a standalone novel, there is a personal thread through the works.  Resolve was about losing one’s way.  Measure Twice was about recovery and seeking redemption.  Chalk’s Outline is about coming to terms with what you have done and accepting the person you have become.  The three books make for an unorthodox trilogy, but I think the world of crime fiction can use a little quirkiness.

3. Your covers all have a similar theme and minimalistic look. Have you used the same designer? Was that on purpose?

It’s a funny thing about the covers.  My first publisher didn’t really give me any input into the covers.  Only after asking a few times, did they let me see the cover drafts and the truth was I didn’t care for any of them.  Apparently my solid C in eighth grade art class didn’t qualify me as a graphics expert.  Go figure.  Eventually, I resigned myself that one of the drafts they sent would be used so I asked them to go with the obvious choice.  I mean, I live near Pittsburgh and the book was set in Pittsburgh, so they had to go with the black cover with the gold text, right?  Right?

In the end, it turned out great because people love the red and black cover and it stands out on a bookshelf or computer screen.  So when Measure Twice landed with another publisher, I chose to lay low and keep my mouth shut about the cover.  However, it turned out they actually wanted my input and I was able to give some ideas.  But, when I submitted ideas for the graphics, I forgot to mention any color preferences.  The next thing I know, I received a draft cover attached to an email that read, “We know from looking at your first book that you must really like the red and black style, so we went with that.”  So, now I’ve simply stuck with the color scheme and general style. Somehow a brand was accidentally created for my works. You may have noticed a lot of my author strategizing is by accident.

Check out the cover of @jjhensleyauthor's new book, Chalk's Outline, and enter to win! Click To Tweet

4. You’re currently writing for the ITW site. How is writing for a website different from writing a book. What have you found to be easier/harder and why?

Yes, I am part of a group of authors called Murderers’ Row who write for the International Thriller Writers’ website The Thrill Begins.  The content is intended for newer authors, but is entertaining for bloggers and book lovers.  Having a more specific audience in mind makes writing columns a little different than writing a book.  Fortunately, I have a blog site called Steel City Intrigue and the experience of writing posts there has gotten me used to writing shorter, more informal pieces that communicate an idea in an entertaining way.

This sounds odd, but in some ways I actually find writing the columns for The Thrill Begins a little more challenging than writing books.  Once I start writing a book, I set myself on a particular course and while I may not know exactly where I’ll end up, I know where I started.  With a column that is addressing a particular topic, I often feel like I’m starting in the middle of someone else’s journey, because the content isn’t as much for me as it is for the audience.  As opposed to sitting down and typing out an entire novel that is deeply meaningful to me, my columns are usually intended to lend insights into the writing process and business of publication while trying not to sound like an idiot.

There is increased pressure because if I come across like an idiot on one page in one of my books, then my incompetence might get lost in the other 279 pages.  If I get exposed in a 900-word column, then I might as well put up a billboard next to Interstate 79 that reads, “J.J. Hensley is a moron”.  I’ve seen worse billboards along the interstate, especially during an election year, but I’d still rather avoid that one.

5. You’re an avid runner – can we expect that to find its way into your latest book, too?

I always include a little bit of distance running in my books.  I mention running much less in Measure Twice and Chalk’s Outline than in Resolve, but it still pops up from time to time.  I’ve discovered it’s a great way to allow the protagonist to reflect and to remind the reader that life is a distance race, not a sprint.

Unless someone is trying to kill you.  Then by all means, sprint!

6. You have a very supportive following on social media. What advice do you have for authors trying to build their own community?

Be funny.  If you can’t be funny, then quote people who are.  Nobody wants to read negative posts and tweets day in and day out.  Life is full of serious issues, but you can still address most of them without forcing your followers to reach for a bottle of Xanax.

I’ve written a manuscript titled Bolt Action Remedy that is completely separate from any of my previous works.  It’s represented by Jill Marsal of the Marsal Lyon Literary Agency.  I don’t know where it will land, but I’m sure it will find a good publisher in the near future.  In the meantime, I’m working on the second book in that series and it’s currently titled Record Scratch.

Like most authors, I have no idea where all of this is going.  But, I’ll keep doing this as long as I’m having so much fun writing novels and getting out to meet so many readers who don’t seem to think I should have a billboard mocking me.  At least for now.