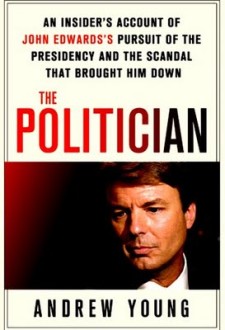 The Politician: An Insider's Account of John Edwards's Pursuit of the Presidency and the Scandal That Brought Him Down by Andrew Young
Published by Thomas Dunne Books on January 30, 2010
Genres/Lists: Non-Fiction, Political
Pages: 320
Read synopsis on Goodreads
Buy the book: Amazon/Audible (this post includes affiliate links)

Update: Since writing this review, Rielle Hunter has released AND apologized for releasing her book, In Hindsight: What Really Happened. Check out this article she wrote for the Huffington Post.

Oh, how I wish I could have read the ending of this book first! But of course, if I had, I wouldn’t have experienced the full range of emotions from outrage to disbelief. Written by Andrew Young, top aide to former Presidential candidate John Edwards, The Politician: An Insider’s Account of John Edwards’s Pursuit of the Presidency and the Scandal That Brought Him Down is his way of setting the infamous Rielle Hunter scandal straight.

I went into this book a little skeptical because I lived in North Carolina while the 2008 debacle went down and had preconceived notions of what had happened. I mean, how could a married father like Young accept responsibility for a child that wasn’t his? What does that say about his own values? And these questions are why I wished I could have read the ending of the book first. Here is a breakdown of the emotional roller coaster this book took me on:

In the end, I have sympathy for Young and everything he went through. I’m mostly sympathetic toward his wife and children, even though his wife was more or less willing to participate in the charade. Edwards had fooled everyone, including his friends, donors, and wife. While I don’t think that Edwards intended to use Young as the pawn that he became, Young’s eagerness to “never say no” led him right into the lion’s den. I’m not sure where Young is now, but I hope that he’s been able to move beyond what happened.

Side note: I tried and failed to find some of the photos referenced in this book, such as the one of John Edwards in People Magazine and the one of Teresa Heinz removing Jack Edwards’ thumb from his mouth. I wish the author/publisher had included these photos that were described so vividly!