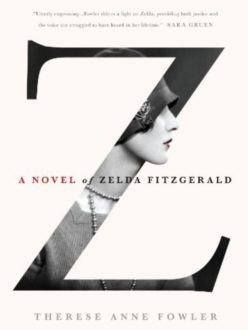 Z: A Novel of Zelda Fitzgerald by Therese Anne Fowler
Also by this author: A Good Neighborhood
Published by St. Martin's Press on March 26, 2013
Genres/Lists: Fiction, Historical Fiction
Pages: 384
Read synopsis on Goodreads
I received this book for free from NetGalley.
Buy the book: Amazon/Audible (this post includes affiliate links)

Have you ever read a book that leaves you feeling peaceful? That’s how Z: A Novel of Zelda Fitzgerald by Therese Anne Fowler left me feeling. It reminds me of being on a boat that rocks in time with the steady ocean waves or floating down a lazy river. If I had to pick one word to define my reading experience, it would be languid, and I loved every minute of it.

Set in the 1920’s, Z chronicles the tumultuous marriage of Zelda Sayre and famed author, F. Scott Fitzgerald. Because Fitzgerald is in my family tree, I just had to read this and was thrilled to get my hand on a copy before it comes out on March 26, 2013. I didn’t know much about Fitzgerald’s life, but I was both angry and sympathetic toward him in equal measure throughout this book.

Placing her faith in Fitzgerald’s potential as a writer, Zelda left her family in Alabama and joined her new husband in glamourous New York City. Awed by its possibilities, Zelda quickly plants herself by her husband’s side in popular society and they bounce around from NYC to Europe (mostly France) in order to accommodate Fitzgerald’s fickle standards for productive writing. Moving through the decade in a haze of alcohol and money woes, the couple navigates the trials and tribulations of being a literary architect in the time of T.S. Eliot, Ernest Hemingway, and Fitzgerald himself. Together, they fall down the rabbit hole (for her part, Zelda tries to establish her own identity on multiple occasions, only to sacrifice her desires for the success of her husband and detriment to her health).

In reality, scholars debate whether Zelda’s medical condition and desire for independence ruined Fitzgerald or that Fitzgerald’s alcoholism and relationship with Ernest Hemingway ruined Zelda. As is usually the case with books that are inspired by true events, I was left with less than positive views of the characters. I finished the book thinking that Fitzgerald was a selfish man, Hemingway was simply a jerk, and Zelda was a sympathetic character being constricted by society’s rules at the time. But I must give credit to the author, for Fowler did a wonderful job painting a 3-D picture of each person and another reader could easily have more sympathy for Fitzgerald or Hemingway.

Z crosses many genres, including historical fiction, a bit of romance, and literary fiction. I am sure it will have wide appeal when it comes out and am looking forward to its success. There is already a lot of buzz about it and am excited to be on the front end of reviews!

How about you? Do you plan to read it? How do you feel about fictional stories based on facts?