This post was written by Laura Ellen Scott, author of The Juliet.

I’m excited to be asked to recommend a handful of kick-ass mysteries for the readers of The Book Wheel. For me, writing mysteries is the culmination of a lifelong dream, one that you could say I was born into, since my parents named me after Otto Preminger’s classic noir film, Laura. My first mystery novel, The Juliet, is about the search for a cursed emerald in Death Valley, and it was released last March by Pandamoon Publishing. My next novel is The Mean Bone in Her Body, the first book in the New Royal Mystery series, set in a college/prison town in Ohio. What follows is a short list of writers and title titles that were particularly inspiring to me.

Straub writes infinitely layered, jazz inflected psychological mysteries that immerse the reader in worlds both real and unreal, each rendered with dazzling, cartographic attention to detail. Connected by characters, history, and place, and an enduring serial killer, these novels are not dependent upon each other in the conventional sense, but if you do read them in order (or just together), be prepared for as much delight as terror, especially as you discover that coincidences are actually refrains. Quick synopses do not do the works justice, but here goes:  Koko sees a group of Veterans work together to find a vicious killer whose signature recalls Vietnam atrocities. Mystery is about how a teenager’s obsession with an old murder uncovers a sprawling web of corruption in a Caribbean resort community. And finally, The Throat brings together characters from Koko and Mystery to solve a series of killings that are more than forty years old.

Okay, so I’ve been talking about Lia Matera for years, but her Laura DiPalma series has been tough to find, up until their recent re-issue for Kindle. Matera’s writing is as efficient and affecting as it gets. Her prose is riveting, and to the point, and in DiPalma she has a fascinatingly flawed San Francisco-based lawyer-sleuth who kind of has the hots for her genius homeless cousin, Hal. Where Straub uses the entire palette to paint his worlds, Matera uses a thin, sharp, knife to carve out hers. These are short books, almost novellas, so the bundling of the first four into two e-volumes is very nice. Books 1 & 2: The Smart Money and The Good Fight. Books 3 & 4: A Hard Bargain and Face Value Book 5 is a stand-alone: Designer Crimes

Sara Gran, Claire DeWitt & the City of the Dead

Most people write about New Orleans while they are in love with the city, and there’s nothing wrong with that if what you are writing is a travel guide, but Gran’s “Big Easy” is anything but. She writes about a New Orleans that is suffering PTSD from Katrina and Rita, as well as the neglect and corruption of the “recovery” years that followed. Gran’s masterstroke is in her compelling argument about the psychological damage to city youths who came of age post-hurricane.

Why just one Tana French novel, when everything she writes is staggering? Because Tana French fans are perverse, and they like to argue about her books—so picking a favorite means picking a fight. Faithful Place is Book 3 in French’s brilliant Dublin Murder Squad series, and it focuses on adult siblings whose lives were forever affected by a tragedy from their childhoods. I’ll admit to a certain fascination with sibling stories written well. The volatility that arises from a relationship that is intimate and competitive makes for great drama.

Jupiter Jones! As a child I read Nancy Drew, Bobbsey Twins, Hardy Boys, etc., desperately searching for some tiny evidence that these characters were even remotely flawed or realistic; they were doing things I wished I could do, but I really couldn’t relate to their pristine clothing and polite ways. Along came “chubby” Jupiter Jones and his investigator pals. Not only was Jupe a socially brusque know-it-all, but he ran his operations out of his family’s junkyard. This kid got dirty. Like a lot of juvenile detective stories, The Three Investigators were often called upon to solve the riddle of a mysterious object. I love those kinds of stories, and that was the kind of feeling I was trying to recapture in The Juliet.

Laura Ellen Scott is the author of several novels including Death Wishing, a comic fantasy set in post-Katrina New Orleans, The Juliet, a western about the search for a cursed emerald in Death Valley, and the New Royal Mysteries series set in a fictional college/prison town in Ohio. The first New Royal Mystery is The Mean Bone in Her Body, will be released in late 2016. Born and raised in Northern Ohio, Laura now lives in Fairfax, Virginia and teaches creative writing at George Mason University. 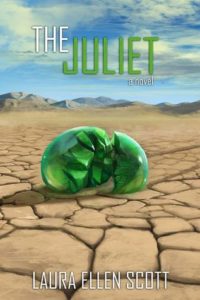 To read reviews of The Juliet and more, check out The Next Best Book Blog!