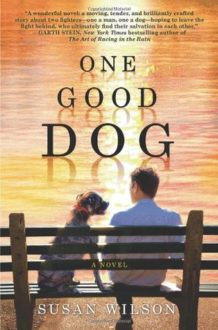 As an owner of two very lovable rescues, I was drawn to this book and just had to read it. As a national bestseller and a catchy cover story, it made it to my must-read list. Big mistake.

At first, I was immediately hooked and raced through the first few chapters of One Good Dog. Unfortunately, it started to slow down about halfway through and even when I finished reading the entire book I felt like I stopped before I finished it. If this was a romance novel, the plot would have been entirely predictable. Boy gets in trouble, falls from grace and is forced to eat some humble pie. Then, a girl comes along, who is just as battered, and together they ride off into the sunset. But in this book, the girl is a dog and there is no “riding into the sunset” because there is not an ending.

The whole book was reliant on the promise of a great storyline. There were so many great beginnings that were either not followed up on or finished up so quickly that it didn’t do justice to its potential.

SPOILER ALERT! IF YOU READ ANY FURTHER, IT IS AT YOUR OWN RISK!

–       The main character, Adam, never really admits to learning anything. There’s no turning point for him that forces him to face the reality of what he’s done and it’s hard to sympathize with him.

–       Adam’s sister, Veronica, is a constant presence throughout the book and when he finds out that she is dead, it only warrants a few sentences at most.

–       Adam spends the entire book hating his father and forgives him in a day, which is about as quickly as his own daughter forgives him.

–       Pretty much all of the other things that weren’t finished up on, like his relationship with Gina, the people who originally owned Chance, whether or not he ever got the forgiveness he wanted from Sophie…..

For a national bestseller, I was really disappointed. The best part of this book is that it has told, at times, from the point of view of the dog. I really enjoyed all of the parts about the dog. Chance’s story was the only one that that had both a beginning and an end. If it weren’t for his chapters, I probably wouldn’t have made it past the 3rd chapter.

SO, if you love dogs and aren’t picky about storylines, this is the book for you. If you like dogs AND want a storyline that has a beginning, middle and end, then consider this your warning.

Support your local bookstores! Click the picture to purchase your copy!