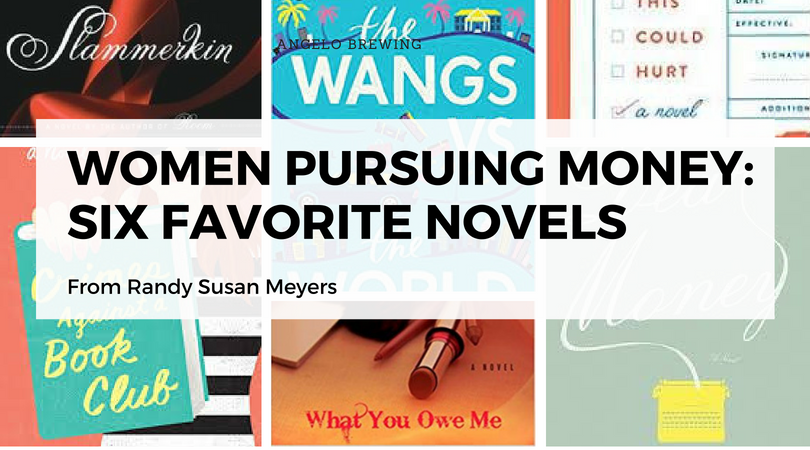 Our lips are zipped about money, right? We’ll spill seamy details about our sex lives before revealing the size of our paychecks—yet, despite this silence, cash problems are often at the core of relationship battles, shattered dreams, and midnight wakefulness.

Despite the plethora of novels trying to convince us that women live for love, women, no less or more than men, can’t live without money.  Just like our brothers, husbands, and fathers, debt overwhelms us, bank accounts control our lives, and the need for more, more, more can lead to wicked choices.

When Madoff’s crimes made headlines, I thought about his wife and what it would be like to wake up one day to find one’s wealth was built on air.  Writing my newest novel, The Widow of Wall Street, allowed me to explore how money gives power and slashes it away. And what happens when a woman is one man away from poverty.

Money.  We’re fascinated. We’re suspicious. And we all want plenty of it. Here are five of my favorite money-infused novels.

Before writing Room, Emma Donoghue examined how far a woman would go to protect herself financially in the eighteenth century.

“Whatever it says about our level of enlightenment (and it’s probably not good), little seems to tickle us more than the tale of an unscrupulous woman who will stop at nothing to secure the glittery trappings of a better life, only to meet a harsh comeuppance. While this familiar plot holds an honored place on the daytime soaps, it plays out far more entertainingly when set down on the page in the intensely stratified society of 18th-century England — or at least, that’s what you come away thinking after reading Emma Donoghue’s heady, colorful romp of a novel, Slammerkin.”—New York Times

Crimes Against a Book Club by Kathy Cooperman

Books about women breaking bad when they need cash for their family own me—add in faux ‘anti-aging cream,’ and you’ve locked me in.

“Cooperman’s latest is a fantastic neighborhood book club meets The Real Housewives of Beverly Hills dramathon, a cautionary no-good-deed-goes-unpunished tale. Her study on the complexities of friendships and marriage, plus a rock-solid plot, snappy, quick-paced dialogue, likable stars and a stable of unforgettable co-stars make it a real page-turner.” —RT Book Reviews

This Could Hurt by Jillian Medoff

When a woman devotes her life to her career, her work world becomes her family.

“Periodically a writer captures the pattern of comedy and tragedy that peppers office life like alternating colors of carpet squares. . .. As smart as Medoff’s critique of corporate inanity is, it’s tempered by compassion for these people, who are ultimately tender with each other, too. . . . Medoff finds plenty of hurt—but strains of hope, too.” —Ron Charles, The Washington Post

Women and money is a touchy topic. Find out which 6 books are @randysusanmeyer's favorites for tackling the topic. #money #women Click To Tweet

The Wangs Vs. the World by Jade Change

What happens when a fortune—the making of it, the spending of it, the privileges it provides—is gone? Do you learn that love, not money, is what ultimately protect you?  Or not?

‘The Wangs’ is rife with passages attuned to the talismanic quality of displays of excess: “the thick, buttery leather and polished gold clasp” of a designer purse “became an axis around which the whole chaotic world would spin.” But as adept as Chang is at describing the spoils of privilege, ‘The Wangs’ isn’t pure candy; there is heart and depth to her work too. A novel at its core about family, it recognizes that regardless of wealth and status “in the end, all we had were the people to whom we were beholden.”—LA Times

What You Owe Me by Bebe Moore Campbell

When friendship becomes business, can financial betrayal be far behind?

“Racial discrimination, the Holocaust, adultery, betrayal, even the problems of the current educational system are only some of the problems covered in this huge story, which spans 50 years and introduces almost as many characters. . . . As Hosanna says, “Sometimes it takes more than one generation to complete a story. Closure is what I’m seeking. Death ain’t nothing but another opportunity.” By the book’s end, the reader gleans that debt, not always having to do with money, takes a long time to collect.” —Post-Gazette

When everyone around you is throwing money like confetti, and you can’t, how do you handle the envy?

“The United States may be known as a place of self-invention and aspiration, but American literature is densely populated with characters who illustrate the perils of trying to change your station. From Lily Bart to Nick Carraway, the road to hell is paved with grand ambitions. And, more recently, with crazy mortgages. In Martha McPhee’s jaunty new novel, “Dear Money,” the spread of subprime mortgages and their frenzied trade on Wall Street forms the backdrop to a traditional story of an individual gradually succumbing to, and being corrupted by, the lure of wealth and all it promises. — New York Times”

Randy Susan Meyers’ internationally bestselling novels are informed by years working with families impacted by violence— and a long journey from idolizing bad boys to loving a good man. About her fourth novel, The Widow of Wall Street, Library Journal wrote, “Full of deceit, scandal, and guilt, her novel expertly explores how rising to the top only to hit rock bottom affects a family. The consequences will leave readers reeling.”

Her novels have twice been chosen by the Massachusetts Center for the Book, as “Must Read Fiction,” who wrote, “The clear and distinctive voice of Randy Susan Meyers will have you enraptured and wanting more.” Meyers lives in Boston with her husband where she teaches at The Grub Street Writer Center