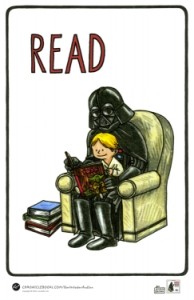 I have to admit, I have never seen the Star Wars movies. For Halloween a few years ago I came home with an adorable costume for my dog and dressed him up to show my husband. As I proudly paraded my dog around the living room in his “robot” costume, my husband’s jaw dropped and he informed me that my dog was dressed up as Darth Vader, and that Darth Vader is not a robot.

This confused me. At that point in time, the only thing I knew about Star Wars was that there was a gold guy, a little trash can man and a robot who says, “Luke, I am your father.” I had no idea that Harrison Ford was in it or that Darth Vader‘s scratchy, robotic voice was not indicative of him being a robot. To be fair, this wasn’t part of some deep-seated hatred of the series or anything like that. For a long time, I just didn’t buy into the hype and the storyline didn’t appeal to me.Then the new movies came out while I was working at Best Buy and they were on every screen in the store for months, so I became sick of them before I had ever seen them.

And so, as my husband stared at me in disbelief, he informed me that he couldn’t marry someone who had never seen at least Star Wars movie. It wasn’t because he was a big fan, but because it was, “unacceptable.” And so I said, “whatever” and agreed to watch one. In all honesty, it wasn’t that bad. I nodded off for a bit halfway through and I couldn’t tell you which one it was (other than that Harrison Ford was in it, which is how I learned that Indiana Jones was not his only big role).

And so, I have never seen them. Despite all of this, I know that there are millions of fans out there who may appreciate that October 6, 2012 is Star Wars Reads Day. I’m not entirely sure what this entails, so I have included the link here!

May the force be with you!