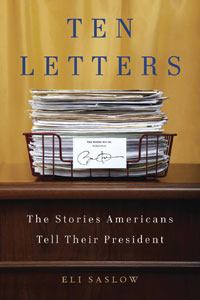 In April 2014, Saslow won a Pulitzer Prize for explanatory reporting. His series of the difficulties people on food stamps face was featured in The Washington Post.

A few weeks ago I received an email about a Washington Post author who was visiting the local school’s campus to sign copies of his new book. I had never heard of the book itself, but the title sounded vaguely familiar, so I hopped on Google and did a little searching. It turns out that the book sounded familiar because it was familiar. “Ten Letters” was, in fact, something that President Obama reads on a daily basis.

The author, Eli Saslow, is a Washington Post writer and this fact may have been more exciting to me than the book itself (until I read it, that is). As a self-proclaimed news junkie, any brush with the Post is exciting, so I ran out and bought, quite literally, the last copy of the book in town. I didn’t have time to read it before I had it signed, but I met the author and vowed to read it soon.

It’s now a few weeks later and I was finally able to read the book.”Ten Letters” is made up of ten chapters, each one following the stories of various individuals who wrote the President and received a response. It is so powerful that the local college, University of North Carolina Wilmington, has its own version of it that is handed out to every single incoming freshman. It is, I believe, required reading for their English classes and reiterates the power of one single voice. I’m half tempted to write the President a letter, too, because this is a book that will resonate with every reader.

“Ten Letters” explores the issues that everyday Americans encounter, including a lack of access to education, rising health costs, the BP oil spill, and more. Each of these issues and stories is familiar. I could personally identify with the effects of the rising costs of healthcare and higher education. I sympathized with Jessica Duran, a high schooler who couldn’t find a part-time job to pay the bills. My heart broke for Na’Dreya Lattimore, the fifth grader that felt she was being shafted in her pursuit of a quality education. I cried reading about Jon Santos and the It Gets Better Project. And while each of the writers received a personal response from the President, only some had a happy ending. I know it is unrealistic to expect a happy ending in a book that chronicles real life issues, but for some reason I went into the book thinking that those were the only letters that would be chosen.

Despite this reality, the book is a wonderful read. It opened my eyes to the people affected by the issues, not to the issues themselves. I think that in today’s world it is very easy to become disconnected from those around us. The media bombards us with sad stories and statistics, but rarely do we get to dive deep into the lives of the people living the stories. This book lets us do just that.