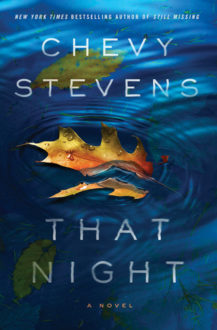 That Night by Chevy Stevens
Published by St. Martin's Press Genres/Lists: Fiction
Pages: 384
Read synopsis on Goodreads
I received this book for free from She Reads.
Buy the book: Amazon/Audible (this post includes affiliate links)

At 17, Toni Murphy was a surly and unruly teenager. She felt suffocated by her parents, had a boyfriend they didn’t like, was bullied at school, and fought with her sister. For many, this sounds like a typical teenager, but for Murphy they were all evidence of her guilt. You see, at 17, Toni was sent to prison for murdering her sister along with her boyfriend, Ryan. The thing is, she didn’t do it. Now 17 years later, Toni is out and trying to keep herself out of trouble, but the pull to find out the truth about her sister’s murder is too great.

Alternating between present day and 1996, when the murder was committed, That Night by Chevy Stevens chronicles Toni’s life story and is broken down into two halves. In the first, we learn about Toni’s teenage antics, her relationship with Ryan, and her difficult time in school. Bullied relentlessly by a group of girls and constantly fighting with her sister, she and her troublemaker boyfriend are obvious suspects when her sister is brutally murdered. In the second half, Toni is released from prison and returns to her hometown, where she does everything in her power to stay out of jail. The problem is that whoever killed her sister isn’t comfortable with her freedom and is doing everything in their power to ruin her life.

While I wouldn’t say that this book is YA, it does remind me of it (honestly, I don’t read enough YA to make an accurate assessment, but it’s the vibe I got). Despite the heaviness of the book, the writing style is short and simple (which I’m not accustomed to),glosses over many of the gritty parts of prison life, and leaves out Ryan’s experiences entirely. Although this doesn’t take away from Toni’s story, it does make it harder to connect with and relate to a hardened and determined post-prison Ryan.

That said, it was still a great book. It was quick, fast-paced, and hard to put down. Although you know early on who probably did it (and is a driving force behind the story), the revelation of what happened That Night was not something I was expecting. If you’re looking for a good whodunnit, then try it out.

What was the last great whodunnit that you read? 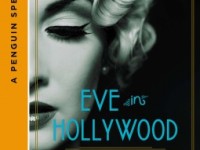 ‘Eve in Hollywood’ is Enticing