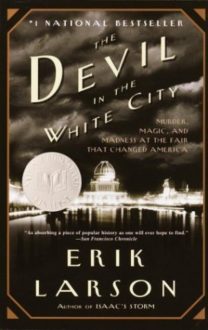 The Devil in the White City: Murder, Magic, and Madness at the Fair that Changed America by Erik Larson
Published by Vintage Books on February 11, 2003
Genres/Lists: Non-Fiction, True Crime
Pages: 447
Read synopsis on Goodreads
Buy the book: Amazon/Audible (this post includes affiliate links)

When I had about 100 pages left in this book (which is about the Chicago World’s Fair and a notorious serial killer), I had a conversation with a friend of mine and told her that I was having a really difficult time getting through it. I told her I just wanted to finish it and that I wanted the book to be over. She was horrified. She started telling me all of the things that she learned from this fantastic book and how it is one of the greatest books she has read in a long time. In a true demonstration of friendship, she offered to mail me a truly mundane book so that I could compare. I declined.

And then it hit me. “The Devil in the White City” is a book that is amazing after the fact. The book is full of interesting tidbits and fascinating facts, like that Walt Disney got his ideas from the Chicago World’s Fair and that Shredded Wheat was never expected to last. Or that George Ferris never got to see the first turn of his famous wheel.  Or that the Fair was cursed because everyone involved in its planning and inception (engineers, workers, the Chicago mayor, architects) met an untimely death. But these are just flecks of information in a sea of pages that describe architectural and logistical problems, explain urban planning and document various power struggles.

Shredded Wheat (they called it “Shredded-Doormat” and did not expect it to succeed)
Inspired the land of Oz
Inspired Walt Disney World
Top beer was Pabst Blue Ribbon, where it earned its name
The first zipper
The first all-electric kitchen (and dishwasher)
The first box of pancake mix by Aunt Jemima
Juicy Fruit
Cracker Jack
Long-distance telephone
The first moving pictures 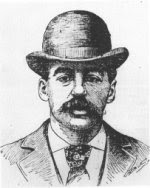 “I could not help the fact that I was a murderer, no more than the poet can help the inspiration to sing.”- H.H. Holmes

The second part of the book is about H.H. Holmes, an evil man (who we would now call a psychopath – see my review of “The Psychopath Test: A Journey Through the Madness Industry” by Jon Ronson” to learn more about them!) who built an entire three-story hotel to lure, torture and murder women, and one of the planning (and hurdles) of the World’s Fair. The only thing that kept me going through these parts (despite it being punctuated with fun facts) was the H.H. Holmes story.

What was creepy about Holmes’ story was not what he did (although they were awful), but rather the parts that were left out. The details of his killings were not outlined in the book. Rather, the author had a way of making me want to get up and shut the closet door and sleep with my back to the wall without really saying anything at all. Here’s an example:

“I heard my door tried and then a key was slipped into the lock.”

Belknap called out, asking who was at the door. The noise stopped. He held his breath and listened and heard the sound of feet moving down the hall.

It should be noted that, like the Chicago World’s Fair, it is said that Holmes himself was cursed (he himself believed he was exhibiting devil like features). And in case you are reading this at night, here is some comfort reading for you:

Strange things began to happen that made Holmes’ claims about being the devil seem almost plausible. Detective Geyer became seriously ill. The warden of Moyamensing prison committed suicide. The jury foreman was electrocuted in a freak accident. The priest who delivered Holmes’ last rites was found dead on the grounds of his church of mysterious causes. The father of Emeline Cigrand was grotesquely burned in a boiler explosion. And a fire destroyed the office of District Attorney George Graham, leaving only a photograph of Holmes unscathed.


And so here I am, less than 24 hours out from finishing it, and I am already focusing on the positives on this book. So I can understand why it’s a bestseller. Never mind the fact that for the past week I have been trudging through the logistical aspects of putting together a World’s Fair. Forget the fact that I have been complaining about it daily (my husband is looking over my shoulder and asked me to remind you of that fact). At the end of it all, I finished it and I don’t regret reading it. In a few weeks, I may even look back upon this experience with fondness.