Today’s post was written by Gina L. Mulligan, author of Remember the Ladies. You can learn more about Gina and her book at the end of this post. 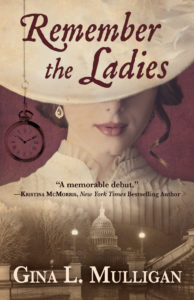 When we ponder the history of women’s rights, we harken to the suffrage movement and the greats like Susan B. Anthony and Alice Paul. But along the road to equality, women worked behind-the scenes to enact change. This is especially apparent when we look at the role of the female lobbyist.

If you imagine a lobbyist as a mustached man in a top hat meeting stately politicians in the shadowed bars of D.C., you’re not far off. The role and term “lobbyist” began in the the mid 1800s. Though many questioned their ethics, their efforts were successful and continue today. Not as well-know from that era are the women who lobbied for causes at the state level. You likely haven’t heard of Emily Hornblower, but you know her work. In the mid 1800s, she petitioned the NJ legislature for children’s rights. Her forward-thinking ideas became the basis for our current foster system.

Throughout the early 1900s, women became more involved in governmental issues, but we don’t find women as official lobbyists until the women’s rights movement of the 1970s. Those passionate about the issues were hired by political and social reform groups. They had earned the title; however, these pioneers faced many obstacles. The men were slow to listen, disregarded facts, and even perceived their self-assurance as making sexual advances. The Women’s Legislative Network estimates there were only about 35 female lobbyists in 1975.

Author Gina L. Mulligan shares the history and struggle of the female lobbyist. Check it out! Click To Tweet

After in-depth research for my novel Remember the Ladies, I created Amelia Cooke, a lobbyist in 1887 before women had the right to vote. In writing the story, I wanted to shed light on this lesser known part of women’s history and explore the many aspects of how women influence our country. What I discovered was a new respect for our foremothers, the ones we know by name and the ones we will never know, a deeper understanding and pride in our government, and a passion to become part of the next generation of women to remember.

Today, we are witness to the stereotypes breaking down. There are now over 650 female lobbyists, and certainly a woman running for President of the United States affords change. But in general, women are still underrepresented in government and combat precedent every day. Take, for example, a female Junior Senator who wanted to use the congressional pool but was told she couldn’t. Why? Because some of the congressmen liked to swim nude. Though this was changed and women now use the pool, this took place in 2008. 2008! The struggle continues.

Gina L. Mulligan began her writing career over twenty years ago as a freelance journalist for national magazines. Her short stories have appeared in Star 82 Review and Storyacious, were performed at Stories on Stage Sacramento, and were included in the anthology Not Your Mother’s Book…on Dogs. She’s won awards from the Abilene Writers Guild, San Francisco LitQuake, and the Soul-Making Keats Literary Competition.

After her own diagnosis, Gina founded Girls Love Mail, a charity that collects handwritten letters of encouragement for women newly diagnosed with breast cancer. She was honored for her charitable work on the nationally syndicated talk show The Steve Harvey Show.

Gina is also the author of two novels, Remember the Ladies, and the soon to be released, From Across the Room. To learn more, visit GinaMulligan.com.