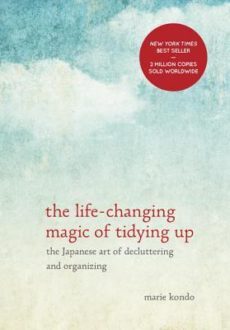 When it comes to cleaning, I think I hate it as much as the average person with an aversion to it. It pains me to vacuum and mopping is pretty much unheard of (luckily my husband doesn’t feel the same way). But when it comes to organizing and tidying, I love it. I can spend hours reorganizing my bookshelves and my closet and was that child who actually wanted to organize the pots and pans. This is surprising considering I create a lot of clutter, but maybe that’s why it’s always so satisfying to declutter.

While I don’t tidy up as often as I’d like, I always thought I was pretty good at it and knew its benefits. Turns out I was wrong. Not only do I tidy the “wrong” way, I wasn’t receiving the longterm benefits. Thanks to The Life-Changing Magic of Tidying Up: The Japanese Art of Decluttering and Organizing by Marie Kondō, I have seen the error of my ways and have taken steps to rectify it. The result is a house that has (so far) remained tidy, which makes coming home a lot more relaxing and frees up my nights and weekends for more reading because I don’t have any catching up to do. You know that phrase Happy Wife, Happy Life? It’s kind of like that, only it’s Clean House, Happy Me.

Before reading this book, I thought that how you tidy up was a matter of personal preference. This is true, to an extent, but what this book taught me is that there are ways to be more efficient at it. For example, you can stack almost double the amount of clothes than you can hang them side-by-side. This flies in the face of everything I told myself when, a few months ago, I decided to hang all of my clothes, but it turns out it’s true. My closet now has just as much stuff, but a lot more room. This is partially because I donated a lot after listening to The Happiness Project by Gretchen Rubin, which I also recommend reading, but there was a significant improvement.

Marie Kondō will teach you how to declutter, tidy up, and get happy in this great book. Click To Tweet

So what else did I learn? I learned that you should organize by category, not room. I thought this was crazy talk until I decided to organize and consolidate cleaning supplies. I had no idea I had so many bottles of Comet and Windex until I scoured the cabinets in my kitchen, laundry room, and three bathrooms. Having previously been a room-by-room cleaner, it’s safe to say I’ve always had this many bottles but didn’t know it because they were so spread out. I also learned that I should be folding my underwear, cease buying more stuff to hold my stuff, and clean in silence in order to truly decide whether an object brings me happiness.

I have to admit, I broke a few of Kondō’s rules, including the silence thing because listened to The Life-Changing Magic of Tidying Up on audio while I was cleaning. I also bought two hanging cube organizers for my closet and used one to fold my jeans and t-shirts and stack them again. I used the other to store my off-season clothing. So while I broke the rule about not buying stuff to hold your stuff, my off-season clothes are no longer in trash bags and take up less room. Now, my kitchen is immaculate, my closet is organized, and I found a lot of pleasant surprises, including:

All in all, I’d call the project a success. I know that this book isn’t for everyone and it’s definitely a system that you have to keep up, but even if you don’t follow it in its entirety, it offers a lot of great tips for being more efficient in your tidying up.

Recommended for: Anyone who needs the motivation to get tidying!

What surprises have you found while tidying up?