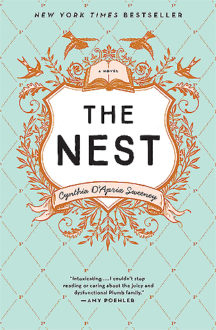 After reading a few non-fiction books in a row, I was thrilled when The Nest by Cynthia D’Aprix Sweeney became available at the library. It’s been getting rave reviews from people I trust (like Sarah’s Bookshelves) and I had the sneaking suspicion I was going to love it, which I did. The Nest is the story of a four siblings who are banking on an inheritance, only to have it jeopardized by one horrible decision made by one of their own. Each of the siblings is dealing with their own issues and the possibility of losing all of that money brings lurking resentments to the forefront.

Why was it so easy to wound the people you loved the most?

There’s Leo, who made the horrible decision that started the whole ordeal; Bea who is trying and failing to write a much-anticipated novel; Jack, who is hiding things from his husband; and Melody, who is in financial trouble. All are counting on The Nest to solve their problems, but what happens if the money never comes? Faced with this possibility, they team up to figure out how to get the money back. The problem is each of them is hiding their own secrets and as anyone from a big family knows, secrets don’t make friends. They also don’t solve problems, and the scenarios that play out between them are entirely plausible.

I recently read Why We Came to the City by Kristopher Jansma (a fantastic book, by the way) and I couldn’t help but draw comparisons even though the writing styles and stories are profoundly different. Both took place in New York City but paint very different pictures of the Big Apple. But what really stuck out was that both draw a line between before and after and use vivid imagery. While Jansma’s was much more pronounced in dividing before and after, Sweeney highlights pivotal moments in each of the siblings’ lives that help them develop and characters and propel the story forward. As for the imagery, I felt as if I could touch, hold, and see things that don’t actually have a physical presence. Here are two examples:

Clearly, Sweeney has a knack for bringing emotions to life. Throughout the entire book, I was so wrapped up in what was going on with each of the characters and the scenes that were set that I forgave them their flaws. I do wish there was some closure for two of the secondary characters but, on the whole, The Nest deserves every single one of its positive reviews.