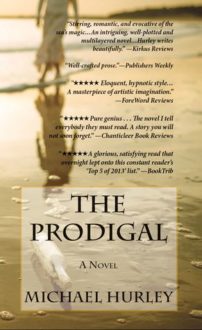 The Prodigal by Michael Hurley
Also by this author: The Vineyard
Published by Ragbagger Press on June 1, 2013
Genres/Lists: #30Authors, Fiction
Pages: 358
Read synopsis on Goodreads
I received this book for free from Edelweiss.
Buy the book: Amazon/Audible (this post includes affiliate links)

What do an alcoholic priest, a towboat operator, a disgraced lawyer, and a mysterious woman have in common? In The Prodigal by Michael Hurley, the answer is Ocracoke Island. Telling the story of four people trying to come to terms with their inner demons, The Prodigal offers a stunning portrait of human vulnerabilities.

This book is two really two stories in one, though they blend together seamlessly and come full-circle in the end. The first is about redemption and overcoming past mistakes, for each of the main characters is battling their own demons and mistakes. The second is of a more mythical nature, which centers around Sarah and an ancient ship that the characters stumble upon. It is their quest to find the origins of the boat that sends them down a path of danger, which draws the attention of both a powerful businessman and the Vatican.

“Penitence is a temporary thing. We’re all thieves by nature and saints only by grace.”

What I liked about this book is that it plot-driven and has fantastic character development. By the end of the book, I was emotionally invested in each of them and was racing through the pages to find out where the boat came from and why these particular people had to find it. It also has a perfect villain, which I find increasingly difficult to come by. What I really love about The Prodigal, however, is the way the author touches on the delicate aspects of human emotion. The feelings of gut-wrenching regret and the sadness of loneliness are emotions that nearly everyone can relate to, and Hurley’s writing style allows the reader to truly empathize with the characters. By the end of the book, I had physically experienced a range of human emotions, which is no easy feat.

If you’re looking for a book that is equally driven by character and plot, or want to be consumed by a story, then I recommend The Prodigal.

Do you believe in the power of redemption?