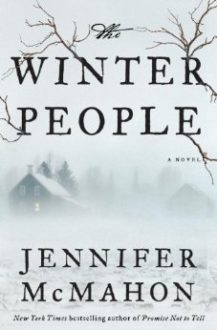 If you’re looking for a book that will have you reading into the wee hours of the morning, then search no further because The Winter People by Jennifer McMahon is the book for you. Set in the tiny town of West Hall, Vermont, this creepy gem bounces back and forth from the early 1900’s to present day; the common links being swift disappearances and unexplained deaths.

The Winter People starts out telling two sides of the same story, one about a missing mother in present day and the other a missing daughter a century earlier, as told by the mother in her diary. As the book progresses, McMahon weaves a tale that reminds me of an accordion, bringing the two stories closer together and adding intrigue by pulling them apart over and over. The result is a fantastically creepy story that will both shock you and make complete sense.

As a self-proclaimed horror-wimp, I was a little hesitant to pick this up because I heard it was creepy. In the end, I caved because everyone was talking about it and I figured I could always put it in the freezer. To be fair, in the two nights I read this book, I did check to make sure the doors were locked a few times more than necessary, closed all of the closet doors, and slept with the light on. That said, this isn’t a horror book in the traditional sense. It’s not a slasher book, nor is it a true psychological thriller. What makes it so creepy is that it taps into a type of madness that could afflict anyone consumed by grief. This, to me, is the scariest type of book.

If you’re a mystery fan, then you must read this book. If you’re not a mystery fan but enjoy books that explore the human psyche and the walls one can build around them to avoid the truth, then this is absolutely the book for you.

What’s the last book that made you sleep with the lights on?