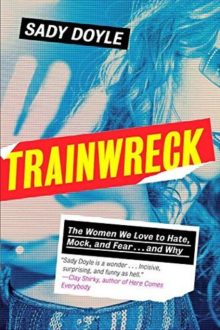 Trainwreck: The Women We Love to Hate, Mock, and Fear... and Why by Sady Doyle
Published by Melville House on September 20, 2016
Genres/Lists: Gender-Based Books, Non-Fiction
Pages: 320
Read synopsis on Goodreads
Buy the book: Amazon/Audible (this post includes affiliate links)

It’s tough to be a woman. As a woman, I know this, but then I read books like Trainwreck: The Women We Love to Hate, Mock, and Fear . . . and Why by Sady Doyle (whose name is Jude Ellison Doyle, however the book was published under the name Sady Doyle in 2016) and am reminded that it’s really tough to be a woman, particularly if you find yourself in the spotlight. Being in the spotlight is hard no matter who you are; your narrative is no longer yours, your life is open for public debate, and there are more people trying to tear you down than build you up, but being a woman in the spotlight is riddled with unique complications that men are, by and large, spared. It is this gender disparity that Doyle explores in Trainwreck and if I’m being completely honest, she called me out on a few of my own judgmental thoughts.

The book is filled with examples, but let’s start with Tara Reid, the it party girl for a few years in the early 2000’s. She was bubbly, fun, and loved to embrace her sexuality, but the minute her insecurities took root and she had a less-than-perfect boob job, she was cast aside by society. And yet, the Internet still loves to talk about her fall from grace. This is what makes her a classic “trainwreck” – she was young, pretty, and shiny. We (society as a whole) didn’t care about her well-being, nor did we care about the fact that she might be going through the same insecurities we were – instead we reveled in her downfall because she was a party girl who “deserved” it. This is also true for Britney Spears (who I have adored since I was 16), Lindsey Lohan, and Rihanna.

Trainwreck is broken down into three sections. First, Doyle discusses why we love a good trainwreck. Why do we love to build women up only to tear them down? And why do we do this to women more than men? Think about it – no one uses the term “trainwreck” to describe male celebrities. In fact, David Foster Wallace and Sylvia Plath were in the same treatment center, but Wallace is revered for having overcome it while Plath succumbed to it, despite similar fates. Similarly, men are forgiven for raping and beating women while women are condemned for getting drunk and wearing a skirt that’s too short or (gasp!) having a sexual life. In other words, their choices aren’t about passion-fueled moments, but a concerted effort to sabotage themselves, so they deserve what’s coming.

Obviously, I don’t believe this last part is true but I have definitely judged my fair share of trainwrecked celebrities. I remember when the Monica Lewinsky scandal broke. I was 15 and she seemed so adult to me. The media’s relentless attacks on her were inescapable, so things like power imbalances were not on my radar and of course she knew what she was doing. As an adult, I see things much differently because she was so young, but it does speak volumes about how the media influences our perceptions about women. It can be hard to recognize this even as an adult, so just imagine how confusing it is for young people developing a sense of self and deciding how and if they want to project themselves to the world, not to mention what it teaches boys about how to interact with and treat women, generally.

Second, she discusses how a trainwreck is built, from their rapid rise to success to their equally swift downfall. But what Doyle points out is that the women we condemn to trainwreck status are actually the feminists of their time. Billie Holliday, Mary Wollstonecraft, Marilyn Monroe, Princess Diana, Whitney Houston, and the Bronte sisters were all considered to be trainwrecks, and yet today we consider them pioneers in their own way – only in death are they redeemable. There are also different standards depending on your race, background, and personal relationship choices. White women, Doyle points out, can’t be sexual without drawing ire (think Kim Kardashian), while Black women can’t be anything but (think Nicki Minaj). And God forbid you date outside of your “class” (think Britney Spears).

What if trainwrecked celebrities were actually the feminists of their time? @SadyDoyle explores this & more in #trainwreck. Click To Tweet

Lastly, she discusses what happens to trainwrecks after their fall from grace and how we need to do and be better. Many disappear into obscurity, but there are also many who spiral into addition or suicide, unable to cope with the onslaught of hatred the world has piled upon her. The scary thing is that this can happen to anyone. Any woman who dares to put herself out there and challenge social norms, from bloggers to authors to celebrities, risks the backlash.  Luckily, or perhaps necessarily, more and more celebrities (i.e. Selena Gomez, Demi Lovato) are opening up about the toll being in the limelight and the constant barrage of attacks takes on them. So, we are learning more about the impacts of our actions.

But perhaps the most intriguing parts of the book (for me) were those that pertain to Britney Spears, whom I am an avid fan of. Doyle confesses that she hated Britney for being sexual and for projecting that on girls around the world, but only later realized that perhaps Britney, herself, was uncomfortable with the Lolita-like fascination men had with her. Britney is the quintessential trainwreck (young, pretty, innocent) whose rise to fame took a drastic turn following the infamous head-shaving incident. No one knows exactly what led to that moment, but we do know that mental health was a factor and rather than focus on the importance of self-care, we scrutinized her even more because it made good headlines. She seems to be in a somewhat better place today, but she is comparatively withdrawn and under the seemingly-forced guardianship of her father, demonstrating that the very nature of being Britney-in-the-spotlight is a difficult balancing act.

What’s most striking about this book, for all of it’s contemporary discussions, is that how we treat women is not a new phenomena. Women used to be gagged with spikes or literally waterboarded if they were considered to be a loudmouthed nag. Women who wanted more than men were giving them have always had to fight twice as hard. And while the methods of suppression are evolving, the underlying sexism that drives the trainwreck culture still exists. If anything, the Internet has made it worse by giving us a place to air every horrible comment that comes into our heads (So You’ve Been Publicly Shamed by Jon Ronson is also a good book on this subject). In other words, women who want things deserve to be torn down, especially if they make their wants known. If a woman stands in front of a man’s house with a boombox and waits for them to come out, it’s a crime, but when men do it it’s romantic. When women show they are sexual beings, they are called sluts, but when men do it it’s part of the norm.

And let’s not forget that women can be just as bad as men when it comes to passing judgment (they were oftentimes the most enthusiastic group at public hangings). Doyle speculates that this is because we like to hate in others what we hate in ourselves, but it’s also because we can feel better about ourselves when we see others make poor choices. The problem with this logic we are judging them based on their worst moments, which I think we can all agree we would hate to happen to us.

So what can we do? First, let’s remember the feminist fight isn’t over and although we have to contend with the confidence gap, mansplaining, and imposter syndrome, we have to keep moving forward. Second, we need to stick up for each other. We are all unique individuals but we all deserve to be respected for who we are. Lastly, we need to check ourselves when we find ourselves judging women on TV and in magazines because although it may be silent and temporary, we are giving in to the problem, not fighting it.

Are you guilty of judging a celebrity trainwreck?