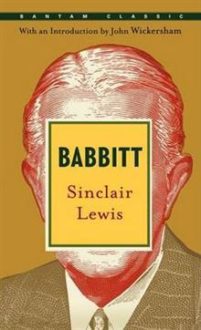 If you were to look at some of the Goodreads reviews for this book, you might be hesitant to pick it up. The main character, George Babbitt, is unlikable, selfish, and a social climber. What you wouldn’t know from most of these reviews is that the book is a complete satire and is absolutely hilarious.

You see, Babbitt is a conservative, buttoned-up realtor with a wife and three children. His kids baffle him, his wife is someone he is fond of, sometimes, and he is completely reliant on the opinions of others. He can’t decide on an issue without the party or the church taking a stance, first, and is obsessed with social stature and moving up the social ladder. He belongs to all the right clubs, attends the right events, and goes to all the right dinners. He’s all for equal rights, so long as it doesn’t interfere with his bottom line, and he can forgive his own transgressions because he’s a moral man. The only thing about him that’s out of character is his fondness for an old friend who has his own problems in life.

So what happens when a self-defined moral man has a midlife crisis? All sorts of things, of course! I don’t want to ruin the book for you, so I’m not going to go into too much detail about what happens, but I will say this book is both flat-out hilarious and incredibly sad at the same time. I picked it up because it was extensively covered in Azar Nafisi’s new book, The Republic of Imagination, and I can understand why (click here for my review). The book is as relevant today as it was when it was published in 1922, and if we were all honest with ourselves, we know someone a lot like Babbitt. The book is a perfect and timeless social satire that will force you to take a look at your own life, wants, and ambitions in a new light and I’m so glad that Nafisi put it on my radar. Plus, it’s on the 1001 Books to Read Before You Die list, so you can cross it off your list!

Recommended for: Fans of political satire.