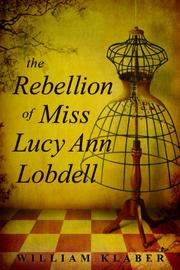 What a cool book! I know that’s an odd description for a novel, especially one that falls into the historical fiction category, but I just can’t think of a better word. This book is just soooo cool. And incredible. And beautifully written. And you know what’s even cooler than the book? The story about how it came to be! (see video below)

The author, William Klaber, fell into the remarkable story of Lucy Ann Lobdell quite accidentally. In the early 1980’s,  he and his wife bought a house in Basket Creek, NY. Twenty years later, a researcher named Jack Niflot (who was intending to write a book about Lucy ) called up Klaber and wanted to meet for lunch. He then told Klaber that not only was his house rumored to be haunted by the ghost of Lucy Ann Lobdell (who Klaber was clueless about), but he handed over all of his research on her to Klaber. You see, Niflot was going to write a book about Lucy but was no longer feeling up to it. Klaber, he believed, was the right man for the task. And thus, a story was born! Can you believe it? Luckily for the rest of the world, the research was handed over to someone capable of weaving such a great tale.

The Rebellion of Miss Lucy Ann Lobdell follows the real-life Lucy (Joseph) Lobdell as she makes her way through the world living as a man. Left pregnant and penniless by her husband, Lucy was forced to move back in with her parents and siblings. Frustrated at being unable to provide for her daughter, Helen, Lucy snuck out of her family home in search of “mens work” that would allow her to build a better life for her and her daughter. Lucy had every intention of working for a short period of time, purchasing some land, and bringing her daughter to live with her. What she found, instead, was a life full of opportunities and risks.

Living as a man, Lucy began to realize that not only did she prefer the freedoms that were afforded to her, but that she was able to develop intimate feelings for other women. Unfortunately, the precarious situation that she had put herself in made relationships difficult and she was ‘found out’ on more than one occasion. Fortunately, Lucy had a sharp mind and thick skin and was able to stand up for herself when attacked physically, emotionally, and legally for her decisions to live as a man. Even after she was found to be a woman and forced to move around (she lived in New York, Pennsylvania, and Minnesota), she refused to wear dresses and would only wear mens clothes.

This is, of course, an incredibly watered-down synopsis of what the book is about. I’m also leaving out some of the really juicy stuff because I don’t want to ruin it for you, but I DO want you to know that there is really juicy stuff.

Here are 5 reasons why you should read it: