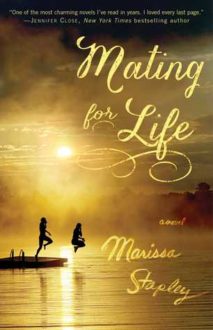 Chances are, if a book references old school Barenaked Ladies in the first few pages, I am going to like the book. Granted, Mating for Life by Marissa Stapley is the first book this has happened with, but it sets a good precedent for future reads because the book is wonderful. Mating for Life is is a story  about the trials of marriage and the bonds between women, namely between the free-spirited Helen and her daughters (Isla, Fiona, and Liane) and between the sisters themselves. Told through alternating perspectives, the story follows each of the women as they navigate their own marriages (or lack of one) and relationships with each other.

For Fiona, marriage has been wonderful, or at least it was until her husband unleashed a secret that makes her question everything about him. Isla, on the other hand, is coping with an overworked husband in ways that will likely backfire. Meanwhile, Liane is having trouble figuring out exactly what love looks like, and her free-spirited, never-married mother isn’t much help. As each woman keeps secrets from the others in the family, Mating for Life explores the underbelly of marriage in its rawest and truest form.

What Stapley does very well is to create characters that the reader is invested in. The issues that the women face are both serious and sometimes common issues faced in marriages, so even if the reader hasn’t experienced it firsthand, it’s easy to become emotionally invested in each of the women’s lives. Another neat thing that Stapley does, which goes along with the title, is to start each chapter off with a brief description of the mating habits of different animals. Not only are the tidbits interesting, but they connect with the story in a subtle and unexpected way. In other words, if you blink, you’ll miss it. Lastly, I love that the family lake house is an integral part of the book. Like Hannah Richell (reviews here), Stapley incorporates a physical location that is equally as important as the characters even though it is a seemingly minor part of the book.

The only minor complaint I have about the book is that there were a few solitary chapters told by peripheral characters, and while I see the value of their stories, there may have been a better way to incorporate them. In fact, I could see one of the secondary storylines becoming a book all on its own (when you read the book, you’ll know who I am talking about. In the end, however, each character had an important role to play and the book would not have been complete without them.

If you enjoy alternating storytellers or books about the lives of women (without being light or romanc-y), then Mating for Life is a good one to pick up. When you do, be prepared to see a bit of yourself and/or your friends in it, because it touches on some of the universal aspects of women’s relationships.