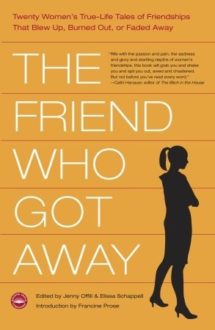 The Friend Who Got Away: Twenty Women's True Life Tales of Friendships that Blew Up, Burned Out or Faded Away by Jenny Offill
Published by Broadway Books on May 9, 2006
Genres/Lists: Essays, Gender-Based Books, Non-Fiction
Pages: 320
Read synopsis on Goodreads
Buy the book: Amazon/Audible (this post includes affiliate links)

The Friend Who Got Away: Twenty Women’s True Life Tales of Friendships that Blew Up, Burned Out or Faded Away by Jenny Offill and Elissa Schappell (author of Blueprints for Building Better Girls, which is on my Kindle) is a book of essays written by women who lost a female friendship. Some were by choice, others by mistake, and a few for no reason at all. As a woman who is entering her 30’s, I have begun to experience first hand the effects of losing a longtime female friendship for no other reason other than drifting away, and I have ended some by choice.

What I loved about this book is that it’s honest. The introduction discusses how it’s okay to breakup with lovers, but that female friendship rarely end with a clean break. This is because women hold each other to higher standards, and to commit an act of betrayal against a female friend is much worse than having done so in a romantic relationship (and women also grant other women more leeway in their behaviors).

While all of the essays were great, I was most intrigued by the back-to-back essays written by two women who had lost their friendship years before. It was fascinating to see two different people describe their perception of the friendship and its dissolution, demonstrating that each person perceives and feels things different.

This is a great book for any woman who has ever lost a friend to time, betrayal, or simply to the circumstances of life. It was nice to realize that I am not alone and that it’s okay not to feel guilty about the ending of a friendship. It’s more important for women to celebrate the time they had together than to focus on the drifting apart.