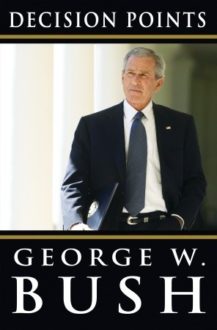 Before I even start this little mini-review, I should probably state for the record that I am by no means a fan of George W. Bush. Other than the fact that he will probably be an adorable old man, he never really did a whole lot to impress me. But, I read this book because I saw him on Oprah and he was actually quite charismatic.

With that said, this book was actually pretty good. It’s not a book where he defends himself or points fingers (only during the Hurricane Katrina chapter did he blatantly rest blame on someone). It’s a book in which each chapter highlights a decision he had to make. He states his reasons for making the decision that he did, the ramifications he had and hadn’t expected and the things he would have done differently.

The book was excellently written (I am sure he had the best of the best as an editor) and each chapter flowed well from start to finish. Much like a book of short stories, minus the story part. There are some very interesting parts in which I can see his point of view (no one was more shocked by this than I was!) and I can see why he made the decision that he did. His intelligence may have been wrong, but his intentions were good.

I also respected that he did not lash out at all of his criticizers. Instead of defending every decision that he made and attempting to make others look bad, he took full responsibility for all of his actions and explained his thought process on why he did what he did. Even if I don’t agree with him, I have more respect for him now than I did three weeks ago.

But don’t tell my Dad that.