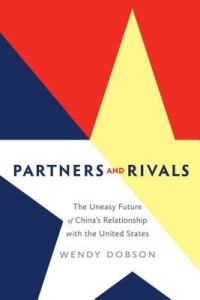 Partners and Rivals: The Uneasy Future of China's Relationship With the US by Wendy Dobson
Published by University of Toronto Press on November 1, 2013
Genres/Lists: Non-Fiction, Political
Pages: 208
Read synopsis on Goodreads
I received this book for free from NetGalley.
Buy the book: Amazon/Audible (this post includes affiliate links)

Last week I attended a forum with Michael O’Hanlon, director of research for the Foreign Policy program at the Brookings Institution, and we spent a good chunk of time talking about U.S.-Chinese relations and the future of what it means to be a superpower. It was both informative and eye-opening and it led me to immediately pick up Partners and Rivals: The Uneasy Future of China’s Relationship with the U.S. by Wendy Dobson.

An approachable and easy-to-read discussion about the current state of affairs in both the U.S. and China, Dobson breaks down both domestic and international policies that will facilitate or hinder the relations between a rising China and the reigning superpower. The main problem I had with the book is that it primarily focuses on what China is doing wrong and, let’s be honest, the U.S. isn’t perfect (Dobson is Canadian). But if you’re interested in this topic even just a little bit, then I highly recommend reading it. It’s short and broken down into easy-to-understand sections that isn’t bogged down with irrelevant information. In an effort to make the review as approachable as the book, I’m going to point out a few of the key bits of information. I hope you learn something!

Both countries think they are exceptional. This isn’t surprising but it’s no less important for its lack of shock value. We’ve all heard about American Exceptionalism, but China’s rise in contrast to a floundering US (and global) economy has given them a renewed confidence in themselves. But despite this, China considers itself poor and wants to focus on domestic issues following decades of humiliation. More on that later.

Economic interdependency. China’s economy is already at 70% of the U.S.’s and they are growing 4x faster, which puts them in a prime position to be the world’s economic leader. The problem with this is that China also owns a good portion of the U.S. debt and is the largest foreign holder. Could this be a national security threat? Some say yes because if China surpasses the U.S. then it’s a whole new ballgame, but others say that they would never do anything to threaten the relationship.

How China perceives the US rebalancing. For those of you who don’t know, the rebalancing (or pivot) is the U.S.’s way of refocusing its efforts on Asia as opposed to conflict in the Middle East. While this may sound great from the U.S. standpoint, the Chinese see it rather differently. China considers themselves poor and wants to focus on domestic issues, meaning they see the rebalancing as a way for the U.S. to interfere with their internal focus and Asian affairs as a whole. This is especially relevant in terms of China’s battle with Japan for claim of the Senkaku/Diaoyu Islands. Combined with the fact that China is geographically surrounded by U.S. allies, like Japan, they feel a vulnerability they may not feel otherwise.
Cultural differences. It’s no secret that Americans and Chinese don’t fully understand each other’s cultures. Americans have a hard time understanding a country without a democratic government (and thus “illegitimate”) that is accused of human rights abuses and authoritarian power while the Chinese see America as a superpower in decline. To be fair, the current government shutdown in the U.S. doesn’t bode well for demonstrating how a democracy is efficient and ideal. Mutual distrust and misunderstanding can lead to roadblock in cooperation.

China’s domestic policies. China’s policy of “growth-at-any-cost” is a source of discontent for Americans who focus on their mismanagement of environmental regulations and labor. Rules about children-per-household and urban migration policies (hukou) are wrought with problems and leaves China with an aging population and rural farmers in poverty. And then there is the fact that the government owns most commercial banks and production, which edges out private competition. Although newer policies are addressing this issue, it will take a massive shift in commercial power in government to affect policies in the long run.

So what needs to happen? According to Dobson, cooperation between the U.S. and China is key to maintaining a vital global economy. China’s reluctance to get involved on an international level while it’s such an influential economic player needs to be overcome. The U.S., in turn, needs to realize its limits and accept the fact that we are not growing as quickly as we once were and that, just maybe, we’re not going to be the biggest anymore. Dobson offers two strategic principles for cooperation: understanding that neither country can dominate the other and reducing mistrust between the two. China will likely end up with the bigger economy, but the U.S. will still have the mightier military and higher number of allies. By managing these differences, the two countries can, and should, work together.

Invisible Influence, or How Society Tells You What to Do, by Jonah Berger
On Mystic Lake by Kristin Hannah Takes the Obvious Path

‘Bitter Orange’: A Delicious Slow-Burn of a Read
Karin Slaughter’s “Criminal” is Just That