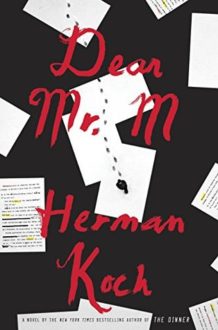 Dear Mr. M is my third book by Herman Koch, and I think it’s safe to say that I’m a fan. I previously read The Dinner and Summer House With Swimming Pool, both of which were captivatingly disturbing in their own rights. Like these books, Dear Mr. M is a complicated story made up of flawed characters and sinister acts, but it’s far less disturbing than his previous books. In other words, this one should appeal to a wider audience.

Set in Amsterdam, Dear Mr. M is a story within a story. First, there’s Mr. M, a famous author known for his reimagined but based-on-a true crime novel. Past his prime and living off of his previous successes as a writer, he struggles, as one would expect, with the expectations placed upon him. When a stranger comes to him with information about the reality behind his book, in which two teenagers kill their high school teacher after his affair with the female student, he’s intrigued, but not necessarily surprised. Second, there’s the truth – the actions that led to the inspiration for the book. Dear Mr. M jumps back and forth, with present day and the past ultimately colliding in an ending that is so Koch-like there could be no other ending.

Each section is a story within itself, but it was the past that left me forgetting the world around me because it was so convoluted and yet, it all made sense. It was a lot like this excerpt from the book:

“A reader reads a book. If it’s a good book, he forgets himself. That’s all a book has to do. When the reader can’t forget himself and keeps having to think about the writer the whole time, the book is a failure. That has nothing to do with fun. If it’s fun you’re after, buy a ticket for a roller coaster.”

With every hypothetical scenario I concocted, Koch both affirmed and dismissed my thoughts –  every time I thought I had it figured out, I was thrown off guard. But unlike some novels that throw in twists that don’t make sense, each twist and turn was plausible and while the ending surprised me, I was still surprised that I was surprised.

Perhaps one of my favorite parts of the book was Mr. M’s pondering on writing and being an author. As an avid reader, I often wonder how authors really feel about their work and their fans. Are signings really all that fun or are they repetitive and a simple matter of duty? What do they think about the inevitable analysis of their works and when people get it wrong? How much does fame change your outlook? Can it suck your optimism dry? These questions, as well as those about what counts as literature, are raised and I can’t help wondering how much of himself Koch put into the book, particularly because there’s a character named Herman. Then again, maybe he did that to throw us all off.

Whatever the intention, the result is a great piece of work with wider appeal than his previous books, which have turned some readers off due to the sensitive nature of the topics. If you are one of those people, I highly recommend casting aside preconceived notions aside and giving this one a go.

Herman Koch captivates in Dear Mr. M, but this time his book has wider appeal. Click To Tweet

On Mystic Lake by Kristin Hannah Takes the Obvious Path 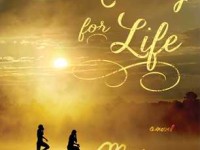 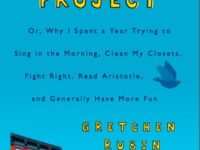