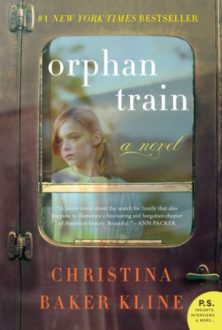 SheReads blogger network, thanks to Traveling With T, who I’m fairly certain secured my invitation after the last Bloggiesta. After reading my first book for the club, I am even more excited than I was going into it!

May’s pick was Orphan Train by Christina Baker Kline, which weaves the stories of a troubled 17 year old foster kid, Molly, and Vivian, an elderly woman with a troubled past. The book hits with the ground running, and once I started reading I couldn’t put it down and read until I feel asleep and picked it up again before I was out of bed the next morning.

Molly, who has gotten herself into a bit of trouble, is sentenced to 50 hours of community service or will be sent to a juvenile detention facility. With the help of her boyfriend, Jack, she secures a place to contribute her time – which turns out to be helping Vivian clean out her attic. Vivian, an orphan train survivor living alone in a massive Maine house on the ocean, has worked hard to leave her past behind her and to move forward. But the ghosts of those that played an important part in her life remain wither her and leaving the past behind proves difficult.

The book bounces back and forth to the early 1930’s to 2011, but most of the story takes place during Vivian’s childhood rather than Molly’s. The writing styles reflect the decades, so Vivian’s is a bit more formal than Molly’s, but Molly’s story is the glue that holds it together. The story begins with Vivian’s placement on an orphan train in NYC and follows her through to adulthood in Minnesota, with most of the emphasis being placed on the first twenty-five years of her life. Rather than tossing the items from the attic in the trash, the two wayward souls take stroll down memory lane, with each box they uncover opening a door to Vivian’s past, and forging a friendship between the two that no one else understands. Together, Vivian and Molly face the past and tackle the future.

By the end of the book, I had experienced an entire range of emotions that included horror, sorrow, glee, and satisfaction (some simultaneously). Not only is this book impossible to put down, but this actually happened in the United States (see video below). A forgotten chapter of history, this is the first time I have read a book that focuses on the orphan trains and the 200,000 children that were transported to homes across the midwest. Vivian’s tale highlights the ups and downs of the trek, as well as some of the situations that children were placed in – both the lucky and unlucky ones. I will definitely be looking into some non-fiction books about the orphan trains and I fully expect to experience a wide range of emotions. 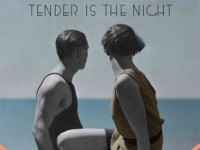 Tender is the Night is as stunning as it is tragic