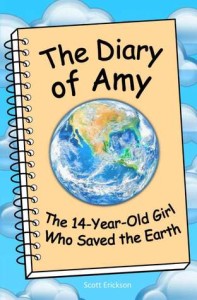 The Diary of Amy, the 14-Year-Old Girl Who Saved the Earth by Scott Erickson
Published by Azaria Press on August 11, 2013
Pages: 264
Read synopsis on Goodreads
Buy the book: Amazon/Audible (this post includes affiliate links)

YOU’RE NOT CRAZY – IT’S THE WORLD

Why I Wrote a Satirical Novel about Environmental Destruction

Writing satirical novels makes no sense. No literary agent will touch them. No publisher wants to publish them. There’s no money in writing them (except if you’re Christopher Buckley).

The motivation originates in being deeply outraged at something in society that’s wrong, and it’s within our collective power to make it right, but we don’t. We may find ourselves in a situation that’s impossible to live with but we have to live with it anyway.

In the Cold War era of the 1950s and 1960s we had to live with the prospect of nuclear annihilation. How do you carry on something like a normal life with the knowledge that our entire civilization could be destroyed at any moment?

Many of us of reacted by building bunkers and stockpiling food. But if you happen to be film director Stanley Kubrick you react by making Dr. Strangelove or: How I Learned to Stop Worrying and Love the Bomb.

How do you live with the memory of the firebombing of Dresden, one of the worst atrocities of World War Two? If you happen to be novelist Kurt Vonnegut, you write the classic satire Slaughterhouse-Five.

How do you react to the corporate takeover of the news media and the increasing packaging of news as entertainment? If you happen to be screenwriter Paddy Chayefsky, you write the brilliant satirical movie Network.

What’s my novel about? It’s entitled The Diary of Amy, the 14-Year-Old Girl Who Saved the Earth. It’s about Amy Johnson-Martinez, a bright 14-year-old girl who grows to believe that her destiny is to save the earth from ecological destruction. It’s a fun little story about ecological collapse and the end of civilization.

I had to write it. It was a way for me to cope with the fact that humanity is systematically destroying the planet’s ability to support life. And to cope with the fact that hardly anybody seems to think this is important, such as our leaders. But it’s not just them. According to the polls, environmental problems generally rank near the bottom of our list of concerns.

I suppose a lot of people think environmental problems are an “elitist” issue, as if it only affects yuppies who want a nice view from their $900 Sierra Designs tent. Maybe it would help if instead of talking about the “environmental problem” we rephrased it as the “destroying the ability of the planet to support life problem.”

This is not an easy thing to carry around casually. For me, nothing else makes sense when, as a civilization, we’re committing gradual suicide.

We’re using up earth’s resources far faster than they’re being replenished. Our economy is still addicted to economic growth. Oil is running out and our civilization is still entirely dependent on oil.

If we’re serious about solving these problems, we’ll need to make some big decision very soon. Yet our government doesn’t seem capable of making any decisions at all.

But what can I do about it? I tried writing my representatives and telling them, “Stop this political deadlock that’s paralyzed this country!” But it didn’t work.

I suppose I could try running for President with a policy of being totally honest and telling the truth. But I’ve seen the satirical movie Bulworth so I know how that will turn out.

Here’s the thing: I had to write the book for myself, but didn’t write it just for me.

Hopefully the book will provide them with a sort of validation. It will tell them: “You’re not crazy.” Because a lot of the time what makes us feel crazy isn’t what we’re feeling, but thinking that we’re the only ones feeling it.

I believe that satire can be very helpful in this regard. It can help us laugh at things that might otherwise cause us to sink in despair.

It’s the reason that Stanley Kubrick’s Dr. Strangelove or: How I Learned to Stop Worrying and Love the Bomb was so important. At a very critical time for a lot of people, that movie reassured us that we weren’t alone.

My goal is to do something similar in this time of looming environmental collapse. Hopefully my book will allow us to stop worrying and love humanity’s self-destruction. What else can you do about it? I suppose we could try to stop it, but I believe my book shows why we won’t succeed.

Has satire ever changed anything? Perhaps Dr. Strangelove helped in some small way to put the threat of immanent nuclear apocalypse on the back burner. Or perhaps not. In any case, eventually people stopped feeling the need to build bunkers and stockpile food.

Of course, the “doomsday preppers” are now doing this in anticipation of the upcoming environmental-economic meltdown.

Who’s to say whether they’re right or wrong? Time will tell. But in the meantime, we have satire to help us live with the question.