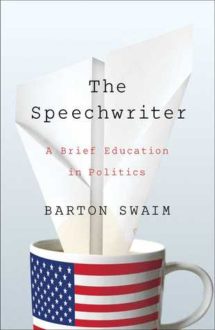 You know that saying that seeing something repeatedly will make you want to buy it? That’s what happened to me with The Speechwriter: A Brief Education in Politics by Barton Swaim. Every time I log into Audible.com, there it was. I finally decided to give it a go because it looked interesting, was relatively short, and had a great narrator in the sample. It’s author was a speechwriter for former South Carolina Governor Mark Sanford, which bodes well for interesting content. In case you forgot, Sanford fell from grace after he was caught having an affair and faced impeachment charges. It all worked out for him in the end, however, as he is currently serving in the U.S. House of Representatives.

I was looking forward to The Speechwriter because the description made it sound like an insightful and funny behind-the-scenes look at Sanford himself. While the book is about Sanford, I had a love-hate relationship with it. On the one hand, the last quarter of the book was great. It offered an insightful examination of Sanford and his fall from grace and gave the reader a glimpse into the good and bad qualities he possesses. More importantly, it was objective, which is what I had been expecting from the start because Swaim specifically points out early on that this is not a tell-all.

Hint: I get distracted when a book discusses a woman's job security with her looks.  Click To Tweet

If you ask me, Swaim either learned how to sell BS while working for the governor or doesn’t understand what a tell-all is. The middle half of the book read so much like a gossip column that I was wondering when the Kardashians were going to make an appearance. It got to the point where I couldn’t tell if Swaim was whining or boasting about Sanford’s annoying and questionable actions. When I got to the point where he actually said the following, I knew I was done because it had absolutely no relevance (and maybe she couldn’t be fired because she was good at her job):

“Somehow, though, she couldn’t be fired. This wasn’t because she was young and chirpy and beautiful, as the schedulers were. Stella was sufficiently attractive, but not eye candy like them. Yet there was something about her that made the thought of treating her roughly, even when she deserved it, unthinkable.”

Honestly, if I hadn’t been more than half done with it and been listening to it while cleaning the house, I would have put it down. But because I wasn’t too keen on figuring out what audiobook to listen to next, I figured I’d stick it out. It did get better – much better – but I was still left dissatisfied. Not only was it gossipy, but the author paints himself from beginning to end as a naive guy who was just shocked by everything he saw. Considering how insightful he is about every little thing and the fact that he’s just as willing to gossip about others to achieve his own ends, I find the naivety hard to believe. I’m sure hindsight is 20/20 but, frankly, the comments about Stella, tainted my entire opinion of Swaim and I found him just as sleazy as the people he purports to find ridiculous.

Recommended for: I’m going to go out on a limb and say that anyone who liked Assholes Finish First by Tucker Max will enjoy this book.