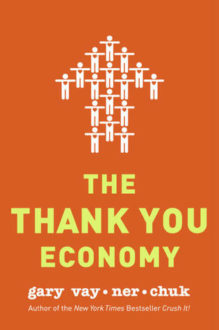 In the town where I was born there was this great, locally owned Ace Hardware store. It was owned by the same family for as long as I could remember and they knew everyone and everything that was happening in town. My grandparents were frequent customers because they lived a few doors down and while I don’t know that they were all friends, they certainly had a sense of community. This sense of community is important because even though I moved to Florida at the age of 3, I wound up in the store every summer when we visited and every single summer the owner knew who I was, what I was doing, what grade I was in, and whether or not I was getting good grades. When I moved in with my grandmother at the age of 19, I, too, became a regular and was treated like family every single time I went in for a candy bar or a soda.

I share this story because The Thank You Economy by Gary Vaynerchuk is about how to harness the power of social media to recapture this sense of community around a business or brand in the digital age. While people don’t congregate around the local hardware shop to swap neighborhood gossip nowadays, they do congregate online and share their experiences with a much larger audience. The sentiment is the same and the reputation of a business still hinges on what people are saying about them, only now people across the country can either become your biggest fans or your biggest haters.

Lululemon experienced the downside of this when someone with their company said that their pants were splitting because women’s thighs were too fat, whereas Reese’s recently enjoyed a surge in popularity on Twitter following their clever response to complaints that their Christmas trees didn’t look like trees. In both instances, a social media firestorm erupted and how the companies responded guided the conversation. In Lululemon’s case, complaints were initially met with blame, whereas Reese’s embraced the complaints and shifted the conversation to a positive. I have no idea whether either response impacted sales but I do know that each company will be forever linked with their responses.

Now, back to the book. I listened to this book on audio and it was narrated by Vaynerchuk himself, which added some spunk to the values he was expounding because he’s a very energetic narrator. Although he went “off script” a lot, his advice is sound. Most of what he shares was not news to me, but as someone who has, at times, come to see social media as a chore rather than an asset, it was nice to be reminded of the power of conversation and that yes, Twitter is important. The main takeaway is that using social media to promote a brand or business is about more than click-through rates and advertising – it’s about building a community of supporters who will both buy what you’re selling and convince others to do the same. It’s also about addressing the concerns of those who are unhappy and leaving them feeling as if the issue was resolved even if they never buy from you again.

Think about it. Have you ever tweeted about a brand or product and had them respond to you? A friend of mine recently tweeted about her annoyance with a company’s change in rates and their failure to communicate it to current customers. Their quick response and willingness to work with her not only resulted in her remaining a customer, but also becoming one of their biggest supporters. Similarly, I once tweeted about my disappointment in a damaged product that came from Bed, Bath, & Beyond. They, too, responded promptly and while the resolution was only partly satisfying, their effort left me neutral about them. In other words, they may not be my favorite company but I’ll likely shop with them again and certainly won’t try to deter others from doing so.

The important thing to remember about both of these examples is that the companies did something, which is what is important in the long run. Whether it’s a simple thank you for kind words or promptly addressing concerns, the simple act of doing something goes a long way. In other words, it’s about saying thank you – thank you to those who keep you in business and thank you to those who help you get better at each bump in the road. Word of mouth is free and it takes just as much energy to be awful as it does to be nice, but only one of these will result in organic growth. How you respond online will guide the conversation about your brand, which is why it’s important to remain active, monitor what people are saying about you, and respond appropriately.

To put it in Vaynerchuk’s own words, businesses need to care first and sell second. Social media is about conversation and you should be adding value to the lives of others, not focusing solely on the value they give you. If you care, you will sell, and to show you care you should interact with everyone who reaches out to you, for better or worse.

Now, show me that you care and say hello on Twitter @thebookwheel!

Recommended for: Anyone who wants to learn more about harnessing social media the right way and is curious about how 50 Cent did just that (because really, any book that mentions 50 Cent is a good book, right?).