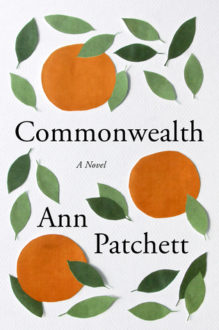 Commonwealth by Ann Patchett
Also by this author: The Patron Saint of Liars, This Is the Story of a Happy Marriage
Published by Harper on September 13, 2016
Genres/Lists: Fiction
Pages: 322
Read synopsis on Goodreads
Buy the book: Amazon/Audible (this post includes affiliate links)

Every year there’s a bestselling novel that I can’t get onboard with. In years past it has been The Book Thief, Fates and Furies, and The Luminaries, and this year it’s The Vegetarian by Han Kang and Commonwealth by Ann Patchett. It’s not that I don’t understand the underlying complexities within both stories, nor that I don’t appreciate the writing, but rather that I had a complete inability to connect with the characters.

Commonwealth started out promising but was never able to hook me. Even when I found myself getting into the story, I never had that moment where I knew that I cared about the characters’ well-being or futures. This was disappointing because I generally love Patchett’s novels and went into this one with the expectation that I would love it, as well, particularly with the rave reviews it was receiving (it’s at the top of several Best of 2016 lists).

That said, I’ve been able to narrow down the reasons for my inability to connect with this book to three things, and hopefully my issues will not be yours. First, I had a difficult time remembering which children were born to which parents and where they ranked in birth order. So instead of focusing on them as individuals, I spent too much time trying to figure out where they fit in. Second, and related to the first, was that none of the characters felt fully fleshed out. This is a book about the interconnectivity of their lives, so without delving into the stories of each individual, I felt I was missing key pieces of their personalities and backgrounds. Without strong characters, the connections felt forced. Lastly, and speaking of forced, the book is riddled with transitions that were awkwardly structured, leaving me pondering them rather than moving on with the story.

Not every 'Best of' book is for you, and for me it was Commonwealth. Click To Tweet

Ultimately, Commonwealth is the story about harboring secrets and resentments and the the unbreakable bonds of even the most disjointed families. While I appreciate what Patchett was trying to do, I wonder whether the book’s popularity is rooted in the novel itself or the reputation of its author. It’s certainly a decent read, but it’s not one I would rank as a best book of the year. If you’re new to Patchett, I recommend picking up State of Wonder or The Patron Saint of Liars, both of which were fantastic.

Recommended for: Patchett fans will want to read this one, but for a more glowing review, check out this one from Sarah’s Book Shelves.

What book disappointed you in 2016?

‘The Inseparables’: A Fresh Take on Dysfunctional Family Dramas
They Aren’t Vampires, But You Will Drink Up This Debut Novel Anyway
On Mystic Lake by Kristin Hannah Takes the Obvious Path