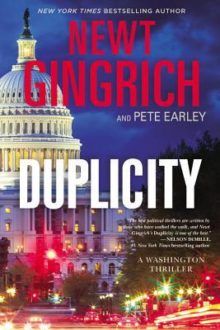 Newt Gingrich called this review “very impressive,” “well-thought-out,” and “honest.” He also posted it on his site!

Did you know that Newt Gingrich writes novels? I did not but it since I was first invited to read this book for Center Street, a Hachette Book Group imprint, I have learned that he has, in fact, written several. As in more than 10. Clearly, I have been living under a rock and, contrary to my previous opinion, I was not being invited to read the product of his first foray into novel writing. In hindsight, this is a good thing because over the years he has been able to hone his craft and write a book that’s worth reading and Duplicity is one such novel. He co-wrote this book with former Washington Post reporter and Pulitzer Prize finalist, Pete Earley, who is a dedicated mental health advocate and has (from what I could Google) written very balanced articles. It is his experience that, I’m sure, helped to keep the scales more even.

I must admit that I’m not a Newt fan when it comes to politics, so I was hesitant about the subject matter of his latest book. It’s described as the story of a Benghazi-style attack on a U.S. embassy that was opened by the president for political reasons. Because I’ve followed along with the Benghazi hearings, this immediately put me on high alert and I went in mentally prepared for a book that leaned heavily on overt political rhetoric and liberal-bashing storytelling. Naturally, when I started reading, I was able to point out precisely these things.

But it wasn’t long before a funny thing happened – I became engrossed in the story. Not only that, but I found myself flipping the pages so quickly that I forgot to look for political rhetoric and started enjoying it. Then, about halfway through the book, I pulled myself out of the story and realized that the book is pretty balanced and that this isn’t a book about personal politics at all – it’s just a book! In fact, Muslims, marines, politicians, and the media are all portrayed in both positive and negative lights, meaning personal politics were not at all the distraction I had anticipated.

In short, I was wrong (insert foot in mouth here). My own preconceptions had me expecting one thing and it turns out my expectations were completely off the mark. Although politics are certainly a part of the story (it is, after all, a book about a U.S. embassy) it is definitely not the main focus. Instead, Duplicity is about the individual men and women who took part in opening the embassy and the personal histories that put them in the line of duty in the first place. They include a CIA operative who is convinced attacks by different terrorists groups are actually being coordinated by one person, a woman marine Captain who wants to step out of the shadow of her family tree and fight for her country, and a president whose one decision cascades outwards. The three lives become entwined when the embassy is attacked and each of them will be permanently and deeply affected by the events they bore witness to and participated in.

Duplicity was written for the masses, so in addition to being well-written, it gives the reader everything he/she needs to know about the history of Somalia to understand the story without becoming a history book. It also delves into horrific subject matters, such as beheadings and mutilations, without getting graphic. Rather than relying on the action sequences to propel the story forward, Duplicity takes a character-driven approach and focuses on the thoughts and actions of a few key players. While the subject matter offered the authors the prime opportunity to go for broke on the gore scale, they chose to hold back and focus on the people and it’s a better book for it.

Part of me wishes I could go back and read this book again without knowing who the author was because it would have saved me some nervous energy going into it, but the other part of me thinks that I wouldn’t have enjoyed the book so much if I didn’t have my own biases to contend with. It just goes to show you that you can’t always judge a book by its cover or its author (I’m looking at you, Franzen-haters) because you might miss out on a book you would have ended up liking.

Recommended for: Fans of political thrillers with a foreign policy twist.

Learn more about Duplicity and its authors here.

Who is an author who surprised you?