Wow! I can’t believe the end of another #30Authors is here. Thank you so much to everyone who has hosted, contributed, and supported this year’s event. I am so thrilled to have the incredible Nicole Dennis-Benn today on the last day of this year’s event. I’ve enjoyed seeing her popularity explode over the past couple of months (her book, Here Comes the Sun, was an An Amazon Best Book of July 2016) and can’t wait to see what is in store for her. And now, on to her review!

#30Authors is an event started by The Book Wheel that connects readers, bloggers, and authors. In it, 30 authors review their favorite recent reads on 30 blogs in 30 days. It takes place annually during the month of September and has been met with incredible support from and success in the literary community. It has also been turned into an anthology, which is currently available on Amazon and all author proceeds go to charity. Previous #30Authors contributors include Celeste Ng, Cynthia Bond, Brian Panowich, and M.O. Walsh. To see this year’s full line-up, visit www.thebookwheelblog.com/30authors or follow along on Twitter @30Authors. 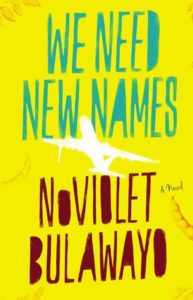 In NoViolet Bulawayo’s debut novel, We Need New Names (Little Brown and Company, 2013), we are immediately engrossed in the life of the ten-year-old narrator, Darling, and her friends—all given names that seemingly depict their fates—Bastard, Godknows, Sbho, Stina, and Chipo. Set in Zimbabwe amidst social strife, the novel is a coming of age story about a young girl’s journey from her impoverished shanty town in Zimbabwe to America. Darling captivates the reader with her charm and innocence, forcing us to see her, her friends, and the life they live in a town ironically named, Paradise. Bulawayo uses subtle irony like this throughout her novel, though she tackles hard themes head-on without being heavy-handed. Among the myriads of themes are poverty, displacement, corruption, immigration, and assimilation.

I started reading this at the beginning of summer—perhaps a bit late, and I must say it was hard to put down. This book is everything I expected and more. I was taken on an emotional ride given my investment in Darling; her innocence apparent in the narration that depicts her disturbing reality.  “Chipo [used to] outrun everybody in all of Paradise but not anymore because somebody made her pregnant…she is not a mute-mute; it’s just that when her stomach started showing, she stopped talking. But she still plays with us…”.  This moving depiction of tainted innocence from a child’s point of view brings us to this sparse, brutal landscape where survival is fought for; each revelation, as gut-wrenching as the hunger pangs Darling describes in the first chapter: “We didn’t eat this morning and my stomach feels like somebody just took a shovel and dug everything out.”

In a recent essay I wrote— “Innocence is a Privilege: Black Children are not Allowed to be Innocent in America”—published in Electric Literature, I reflected on the tragedy of Diamond Reynold’s four-year-old daughter bearing witness to the murder of her step-father-to-be, Alton Sterling, who was shot and killed inside his car by a policeman, right in front of her. I wrote, “For black children, innocence is snatched away too soon, a brutal initiation into a frigid world. Innocence, like freedom, is a privilege.” This book echoes such sentiment. In this case, we are in Zimbabwe, a forgotten land under the autocratic rule of Robert Mugabe. Ten-year-old Darling and her friends’ innocence are stripped as bare as the guava trees they pick—the only source of food the children have until the NGO lorries come with food and gifts. “The waiting is painful,” Bulawayo writes, “We watch the lorry getting closer and closer, but it seems far away at the same time…it’s the gift that we know are inside that make it hard to wait and watch the lorry crawl.”  Whereas many of us are used to seeing our parents and guardians worry about such things as food and shelter, Bulawayo’s young characters reveal to us another reality—a reality where children scrounge around dusty paths and barren trees and neighboring towns for the most essential source of energy.

Breakout star @ndennis_benn shares why you should read We Need New Names by NoViolet Bulawayo for #30Authors. Click To Tweet

Darling witnesses far too much at a young age, including the dead person hanging from the tree, her father’s battle with AIDS, her grandmother’s worries; and most disturbing, the respected man of God whom defeated community members look to for guidance and hope—Prophet Revelations Bitchington Mborro—tackling a young spirited woman to the ground to silence her.  In this scene, Darling’s little friend, Chipo, upon witnessing the prophet on top of the helpless woman, confesses her rape. “He did that,” Chip says to Darling, looking on at the prophet on top of the woman. “That’s what he did.” The he Chipo speaks of happens to be her grandfather—the one who apparently impregnated her—thus breaking the mystery of the child’s belly. Later, we see Chipo desperately wanting to abort the baby with the help of her young friends. “Today we’re getting rid of Chipo’s stomach once and for all,” Darling says. “One, [her stomach] makes it hard for us to play, and two, if we let her have the baby, she will just die.”  Here, Bulawayo nails her characters’ innocence using the distinctive, achingly naïve, yet intuitive voice of a child.

Darling’s escape comes when she is given the opportunity to live in America with her aunt. In America, she grapples with both nostalgia and survivor’s remorse, often thinking back to her homeland, her friends and what she left behind. But more than the sweet ache of nostalgia is Darling’s challenge with assimilating in a new country. Bulawayo captures the nuisances of the immigrant experience in the second half of the book—from language barriers, to the struggle of the undocumented immigrant in America, to the elusive fate of a brilliant young narrator who realizes that without her papers she cannot attend the college she wants, much less go back home to see her family and the friends she left behind.

To be honest, there were times when I felt the issues were stuffed into the narrative without enough room to explore them further. However, I am satisfied with the seismic glimpses of the lives of Darling and her friends, who would’ve otherwise been poster children in yet another Save Our Children infomercial. Bulawayo leaves no stone unturned in her depiction of reality. She writes with compassion about her native country, Zimbabwe. A writer after my own heart, I admire her unflinching lens. She forces our eyes wide open. Forget fairytales with happy endings; Bulawayo is here to remind us that the power is in the telling.

Nicole Dennis-Benn is the author of the highly acclaimed debut novel,HERE COMES THE SUN (Norton/Liveright, July 2016), a New York Times Editors’ Choice, which has received a starred Kirkus Review and is deemed one of the best books to read this summer and beyond by New York Times, NPR, BBC, BuzzFeed, Book Riot, Bookish, Miami Herald, Elle, O Magazine, Marie Claire, Entertainment Weekly, Flavorwire, After Ellen, BookPage, Cosmopolitan, Brooklyn Magazine, among others. New York Times Book reviewer, Jennifer Senior describes HERE COMES THE SUN as a “lithe, artfully-plotted debut”; Pulitzer Prize finalist, Laila Lalami, as well as Booklist have deemed it a “fantastic debut”; and Man Booker Prize winner, Marlon James says “[Here Comes the Sun] is a story waiting to be told”. Dennis-Benn has also been shortlisted for the 2016 Center for Fiction First Novel Prize.

Dennis-Benn has an MFA in Creative Writing from Sarah Lawrence College and has been awarded fellowships from MacDowell Colony, Hedgebrook, Lambda, Barbara Deming Memorial Fund, Hurston/Wright, and Sewanee Writers’ Conference.

Her writing has been awarded a Richard and Julie Logsdon Fiction Prize; and two of her stories have been nominated for the prestigious Pushcart Prize in Fiction.

Dennis-Benn was born and raised in Kingston, Jamaica. She lives with her wife in Brooklyn, New York.