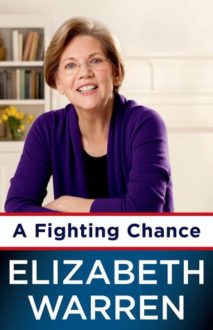 In 2012, Elizabeth Warren burst onto the scene by winning a highly contested congressional race in Massachusetts. Her victory was part of  the country’s most expensive race, as well as the race that saw Massachusetts’ highest voter turnout ever. Before this, however, Warren was quite active within the beltway as an advocate for consumer financial protections and as a Special Advisor for the Consumer Financial Protection Bureau.

In A Fighting Chance, Warren shares with us her rise to power. Growing up, she never heard the word “bankrupt” but knew its implications when her parents faced financial difficulties after her father’s heart attack left them with piles of medical bills. Later, she left college for to start a family, only to return to academia in later years and divorcing her first husband, ultimately landing a job at Harvard teaching bankruptcy law. It was these experiences, as well as many others, that helped shaped Warren’s intense desire to advocate for struggling families, whether through affordable loan repayment options, bankruptcy protections, or consumer financial protections.

It is these passions that makes up the bulk of A Fighting Chance. Although Warren shares her personal story, the book is predominantly about her work advocating for consumer financial protections and bankruptcy protections. Little time is spent on her more recent campaign or time teaching at Harvard, rather she at length discusses why struggling families need to get a leg-up. What’s interesting is that Warren spends a good deal of time discussing the myriad of evils within Washington, D.C., but manages to sidestep any discussion about her being a public official. Of course, she spent so many years fighting against the insiders that most people would be hard-pressed to lump her in with “Congress”, but I wish she had spent a bit of time addressing the contradiction.

So am I glad the read the book? To be honest, I’m a little disappointed that A Fighting Chance was less biography and more explanation than I had expected, but perhaps if I had done my own research ahead of time I would have known this. Then again, if I had known how financially-driven the book was, I may have skipped it entirely and wouldn’t have had the opportunity to learn so much about the financial meltdown, banking industry, and protections available to me as a consumer. If you’re interested in the inner-workings of Washington, the backhanded deals that are made, and the power of banking lobbyists, then definitely pick up this book.