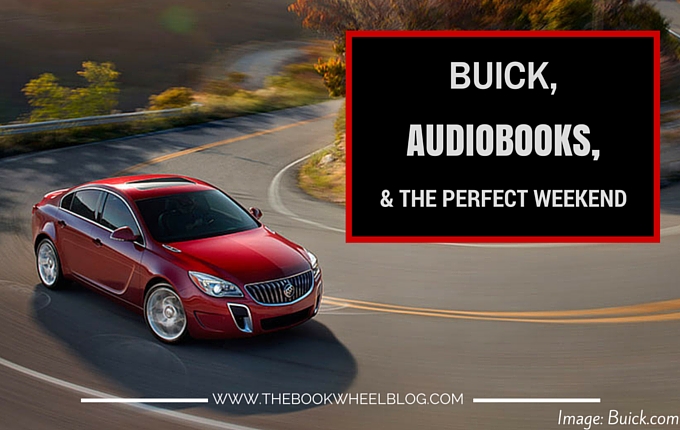 This article is Part 1 of a 3 Part series about my Buick experience. Check back on Monday for a more informal review and photos from the trip!

Last week I had the opportunity to fly out to Big Sur, California and stay at the gorgeous Ventana Inn to test out the new Audiobooks.com integration with some new 2016 Buicks. It’s the first-of-its-kind partnership and is a huge deal for book lovers like myself who also enjoy hitting the road from time to time (read the press release). The weekend was incredible and filled with good books, good cars, good food, and good people, but it was the audiobook and driving experiences that took center focus and I’m thrilled to share my thoughts with you about both.

The 2016 Regal GS isn’t your Grandma’s Buick (insert photo). The new 2016 Regal GS is sleek, powerful, and a treasure trove of fun gadgets and seamless integration. Equipped with OnStar, IntelliLink, Sirius XM and a personal hotspot that lets you connect up to 7 devices, the Regal GS is a luxurious vehicle at an affordable price. It’s roomy and has a sleek digital dashboard that changes colors based on what driving mode you’re in and is responsive to the driver on every level, from the way that it handles to the way the technology responds to you. Most importantly, it integrates with Audiobooks.com and gives bookworms exactly what we want – our own personal audiobookmobile.

Although the car is great and I have a lot to say about it, let’s get right to the good stuff, first. The Regal GS integrates with Audiobooks.com, which we used through Apple CarPlay. Simply plugging in my iPhone synced it to the car, which then allowed me to access almost everything on my phone (music, text messages, phone calls, etc.) on the touchscreen. From there, we listened to All the Light We Cannot See by Anthony Doerr, which played through the Bose 9-speaker audio system like a dream. I used to drive a vehicle that was not part of the Buick family and my audiobooks always sounded a bit far away, which is not the case in the Buick (nor the case with my current GMC). The best part about the integration is that I could download the book right there in my car using my personal hotspot and could play it instantly due to the quick download time. It was pretty amazing.

If for some reason audiobook integration isn’t enough to make you want to buy a car, I have a lot to say about the car itself, too. First, it’s roomy – very roomy – with deep bucket seats and plenty of legroom. It’s also high tech and includes a digital dashboard, a fully responsive touchscreen, a gorgeous navigation layout, and responds to voice commands. As for the driving experience, I have a lot to say about that too, so buckle up and read on.

Driving – We tested out the Regal GS in three different traffic conditions – highway, winding and hilly roads, and in heavy traffic – and found that different features worked well in different conditions. The Regal GS has three driving modes, regular, sport, and GS, with each subsequently offering the driver more control and responsiveness. We used the standard mode for the trip into town and it was a perfectly fine experience. Had we not known there was an enhancement, we wouldn’t have known there was anything missing. But we did know and put the GS mode to work while driving the hilly and curvy roads at 55 mph and the sensitive responsiveness made driving the car a dream. It felt as if the tires were glued to the pavement and I was amazed by how safe I felt taking turns that would make my hair stand on end in my SUV and the pick up was so quick that even my husband remarked, “Go! Go! Gadget!”

Features – All of these features sound great, but they are just the tip of the iceberg. We also tried out the lane departure assistant, which alerts you when you cross into another lane without using your blinker, and the adaptive cruise control. The latter was the most mind boggling feature and it was equally amazing as it was terrifying. In case you don’t know, adaptive cruise control allows the driver to set a maximum speed and then the car auto calculates your speed based on how fast the car in front of you is going. This means that if the car in front of you slows down and then speeds up, so does your car.

It’s a pretty amazing feeling to be in a car that slows down without your input and we definitely braked on our own the first few times because it was such a new experience, but once we let the car do its thing we realized that it knows what it’s doing. Not only does it know how to calculate its speed, it calculates the distance between you and the next car, increasing the distance at higher speeds and decreasing it at lower speeds. We tried out this feature at higher speeds and in stop and go traffic and it worked like a charm both times. Once we got over the fact that the car was, indeed, smart, it was fun to put to the test.

Additional Technology – The car has a lot of gadgets, including a personal hotspot that allows you to connect 7 devices (I sent emails from my laptop in the car!), OnStar, Apple CarPlay, Sirius XM, and a cool RemoteLink app, which shows you important stats about your car on your mobile device. It’s fully equipped with a large touchscreen, backup cam, and navigation capabilities, it’s the perfect car for those who are on the go, including for work and for pleasure.

The GS mode was a great choice for us because our trip took us up US-1, which is a winding and hilly road that demands enhanced driver control. The increased responsiveness allowed us to navigate the roads more safely and meant that we were able to enjoy our audiobook even more. We also spent several hours in the car, heading south to Hearst Castle and north to Pfeiffer Beach, but you’d never know it because the Regal GS was so comfortable that we never thought to wonder how long we had been in the car, nor did we feel the need to get out and stretch our legs.

Thank you, Buick, for allowing me to be a part of this demonstration and I hope you all go out and test drive (and buy) one of the new Buicks! In the meantime, share this post using the #thatsabuick hashtag to let them know you’re intrigued!