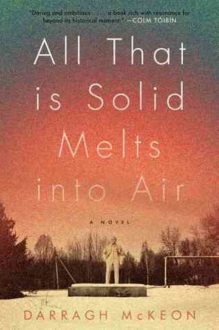 All That Is Solid Melts Into Air by Darragh McKeon
Published by Harper Perennial on March 6, 2014
Genres/Lists: Fiction, #30Authors
Pages: 464
Read synopsis on Goodreads
Buy the book: Amazon/Audible (this post includes affiliate links)

If you were to read the description of All That Is Solid Melts Into Air, you would be led to believe that it is a sweeping story about last days of the Soviet Union. Though this is true, it fails to truly capture the intimate storylines of its three main characters:  a former journalist working in a factory, a young piano player forced from his home, and a doctor who will sacrifice himself for the good of others, that drive the story. When the infamous nuclear disaster occurs at Chernobyl Power Plant, all three of their lives are thrown into turmoil as they navigate the waters of their new uncharted lives.

There are a million reasons to love this book. First, its honest portrayal of the stark reality of the damage radiation can cause is difficult but important to read in order to place the lives of its characters into context. Second, it paints the picture of what life was like in 1986 – from poverty to the suppression of free speech to the emphasis collective action. While Chernobyl serves as the catalyst for the story, its primary purpose is as the anchor that the others’ stories rotate around, rather than being a plot in itself. Third, McKeon is able to place the reader into the setting without casting judgement on it, which is a difficult task for many authors. Lastly, the rich complexity of the characters, flaws and call, bring them to life so that the reader falls instantly in love with both the good and the bad.

All That is Solid Melts Into Air uncovers the messiness lying beneath the stone called life. Click To Tweet

All That Is Solid Melts Into Air is, although not a happy book, not without its happy moments. It’s steeped in reality and uncovers the messiness that lies beneath the stone called life, but perhaps that’s not such a bad thing. There’s more looking back than forward, but this only helps the reader to understand the overarching themes of the book. If you’re a fan of Russian history or just want to learn more about what life was like during this time, then this is a great book to pick up. The story is so great that you don’t even realize how much you’re learning until you’re almost done, and by then you’re hooked.

Check out these other great reviews by River City Reading and Doing Dewey.