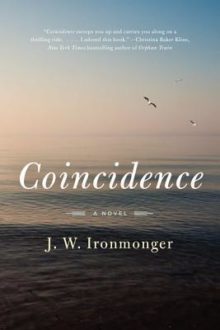 When I was 10 my parents drove me to the midnight departure of my school’s Safety Patrol trip to Washington, D.C. As I was chatting with my friends, my Dad started chatting with one of the bus drivers. Turns out, they knew each other from a decade before in Massachusetts. This may not seem so odd except for the fact that we were living in Florida. He’s not the only one who has had this happen, however. Ten years ago I was working at Best Buy in a Boston suburb and ran into a girl I both went to high school with and lived in the same dorm as in Florida. Not to mention the time that I was sitting in 10th grade debate class when a new girl walked in. Again, we were in Florida but were from the same Boston suburb, her Dad worked with my Aunt, and she sat behind my cousin in English class. We’ve been friends ever since.

Were these coincidences? Absolutely. Explainable? Probably. Regardless, all three instances were totally weird. It’s because I’ve had such odd coincidences happen in my life (including a dozen others I’m not mentioning) that I was drawn to Coincidence by J.W. Ironmonger. The basic premise is that the protagonist, Azalea, lives a life dictated by coincidences. But what if they were more than that? What if her life was predetermined? In an effort to find out exactly what she is up against, Azalea seeks out Thomas Post, an expert at explaining the mathematical probabilities of such occurrences. Thomas, however, is completely thrown by Azalea’s life and together they race against the clock to figure out whether Azalea’s life is predetermined or merely inundated with chance circumstances.

Set in both present day London and a 1992 remote African mission, the book will both make the reader think and teach him/her a bit about history. Written in a way that blends factual writing with the lyrical, it has a great flow and will keep the reader turning the pages. I enjoyed the philosophical portions behind why coincidences happen and whether they have any meaning, but I was equally riveted by the characters. Azalea is sharp-witted and firmly rooted in her beliefs, much to the dismay of the ever-practical Thomas. As their relationship unfolds and they seek to explain Azalea’s life, I was captivated by the dynamic between these two seemingly opposite individuals.

If you’ve ever experienced a strange coincidence in life, then you should pick up this book. There’s only a passing reference to religion, allowing the focus to be on chance vs. destiny rather than God vs. free will. Regardless of what you believe or don’t believe, this book will make you question whether things happen randomly or because they are predetermined. As for me, I’m undecided.

Scroll to the bottom of this post for a YouTube clip of the author discussing the book.

Have you encountered any strange coincidences?